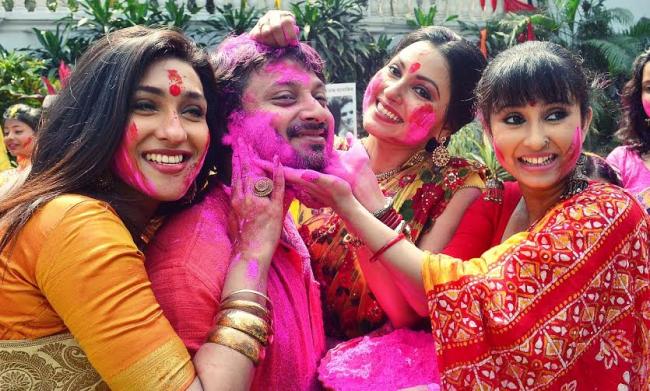 I wish my father were alive and see Belaseshe : Shiboprosad

“I sorely miss my father these days. I feel there are so many unspoken words which I could not share with anybody. I missed my father on the premier day and I miss him every day in my life,” the Ramdhanu director, which talked about the perils of school admission and rat race children go through, told IBNS here on the premier evening.

Shiboprosad, whose debut film ‘Ichhe’ on higher education stereotypes and a son’s rebellious streak to unshackle had been one of the biggest blockbusters in middle of road Bengali cinema, said he believed in connecting our personal issues with the greater audience as art can’t be practiced in isolation.

“Even now how many of us do listen to the little tales of hope, sorrow and expectations of other members of family, our partners and the elderly members! We are drifting from our bases we are turning isolation corners even within the households but we are not correcting our course,” he said.

“The isolation manifests in one way with younger generation and how we are forgetting the roots getting hooked to whatsapp and facebook and in another way with the elderly couples as portrayed by Soumitrada”, one of the directors of the film besides Nandita Roy, said.

“I wish Swatilekha had worked with Soumitra Chatterjee beforehand. The simplicity of the plot reminds of the yesteryear bigger families and  In Ghare Baire both were much younger in a complexer role. Now in the prime of their life and career in a lot simpler role they are together again,” celebrated playwright Rudraprasad Sengupta, flanked by daughter Sohini and wife-theatre personality Swatilekha Sengupta, said.

Actor-danseuse Mamata Shanker, clearly bowled over by the role of Soumitra-Swatilekha in Belaseshe said, “What can I say and I have to say about Soumitra Chatterjee!  Yes it reminds me of Ballygunje Court which had also dwelt on the rapidly extinct family values,” Mamata Shanker said.

Thespian Soumitra Chatterjee was present at the screening along with Rituparna Sengupta, Indrani Datta and others.

Belaseshe, produced by Windows Production and Atanu Raychoudhury,  was released on May 1.