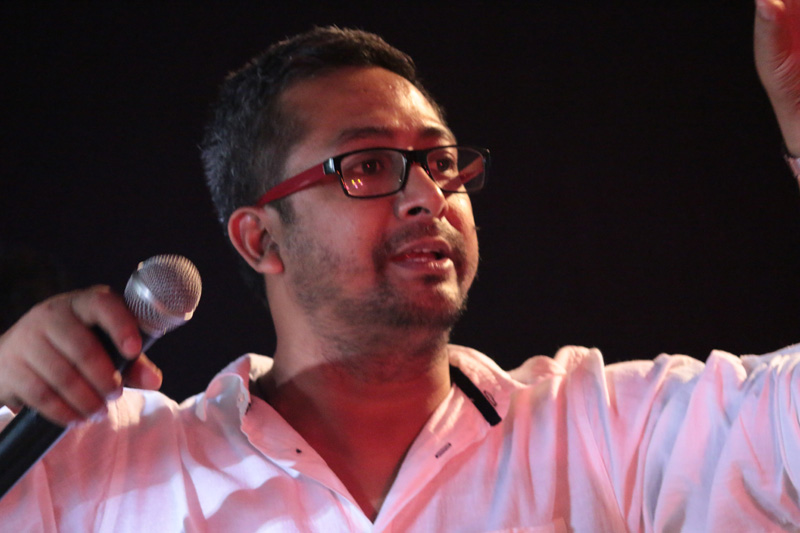 Biswajeet Bora, who won the Best Director award for his film God in the Balcony at the 26th Kolkata film festival last year, is out with his new film Boomba Ride in Mising, a tribal language of Assam.  The director in conversation with  Shoma A. Chatterji

Tell us a bit about the film Boomba Ride?

The film is set beside the bank of the Brahmaputra river, the lifeline of many tribes of  Assam. It’s about a lower primary school where the main struggle of the teachers is to keep the school going as it has only one student - Boomba. But a time comes when the school is on the verge of closure. Boomba takes a plunge to save his school.

What motivated you to make this film?

A few years back I saw a news clip in an Assamese News channel about a school in a backward area which had just one student. It stayed with me and I kept thinking about the education system of my home state. So, I started researching the authenticity and wrote this fictional story. I wanted to make it in Hindi. I approached Anu Kapoor and he immediately wanted to work in the film. In between, I had a long discussion with ZEE Network for producing the film but due to budget issues things didn’t turn out as planned. I decided to make it myself with the prize money from the Best Director award from my earlier film God on the Balcony at the 26th Kolkata international Film festival. I have now sent it to international film festival organisers at Busan, Tokyo, Raindance and Sundance for consideration.

You picked up the cast locally. None of them are professional actors. How did you train them to face the camera?

The artists are all real-life people with no acting background. I met them while I was looking for locations. What I liked most was that the people of this area are very innocent and humble. I thought of using professional actors initially, but the local people and their innocence appealed to me and I thought it would be more authentic to take them in rather than trained actors. All of them belong to the village where I shot the film. Rather than teaching them acting, I explained to them the story and the characters they were going to play. I read the dialogues in Assamese and they translated them to Mising language on spot and performed in their way. I have never met such simple and loving people before in my life. It changed my whole perspective towards life.

Are they real characters? Or, do they come out of your screenplay or a combination of the two?

They are fictional characters but the village location is real. It’s near my house in Golaghat district in upper Assam, but I had never been to the village before. I was not even aware of the village located so close to my home town. It’s a completely different world, untouched by the maddening crowd. The moment you step into the village, you start feeling the connection with nature and just feel at peace.

How long did it take you to shoot the film?

This had been an amazing journey and experience. Because of them, I could finish the film within 13 days! Boomba, the small boy, is one of the brightest kids I have ever met.  He deserves a platform. I am in talks with the family to bring him to Mumbai for studies.  If the film does well, I will be happier for the actors to whom I owe a lot. They haven’t seen anything beyond their village. In fact, many of them have not seen a theatre hall.

What inspired you to take up films as a career?

I wanted to become an actor and took part in school plays. I did a couple of acting workshops, read books on cinema and drama. But there was very little exposure to world of cinema for me. The small town in Assam I grew up in had just one movie theatre. I would often bunk classes to watch films. At home, I would collect any and every film magazine I could find. I loved the Hindi mainstream and the Assamese films of the time. When I saw absolutely no future as an actor in Assam, I went to Mumbai to learn and work on editing. I did a year’s editing course and joined as an assistant editor at a studio. Till then, I didn’t have any definite dream, I was just moving with the flow.

How did direction happen?

Everything changed when one day Jahnu Barua ‘sir’, the famous director from Assam, came to my studio to edit his National award-winning film Tora (2004). I got the chance to interact with him. When the work on the film ended, he asked me to join him as his assistant. My life changed. I began to dream. I could now write and visualise things. I felt that filmmaking was the only way to express myself and find happiness through my work.

Tell us a little more about the Mising people

The Misings are a plains tribe people of Assam. They mainly reside by the river banks.  The beauty of the locale just wonderful; every scene is just like a beautiful painting. We faced lots of hurdles during the shoot but at the same time it was one of the best times of my life.

The opening shot and the closing one are circular and evocative. Is that deliberate to subtly point out that it is possible for Boomba to climb the tree without falling if he is educated?

Yes, the opening and the closing shots are related. In the first shot, we show Boomba is unable to climb the tree even after two or three attempts. But in the end, he climbs it which I use symbolically to show that at last he could scale in life by valuing education that would hopefully change his life. Education can indeed transform a society.