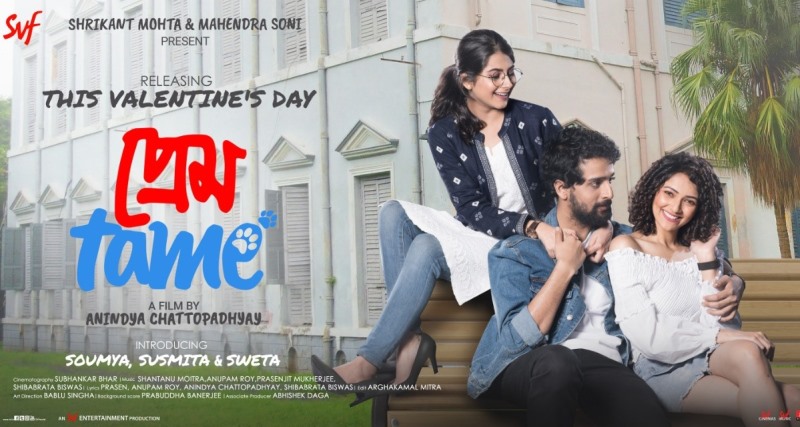 Kolkata/IBNS: After the successful release of ‘Cheeni’ on Friday, SVF announced its next release ‘Prem Tame’ for 2021.

Centring around a not so typical college love story, Prem Tame is a directorial venture by Anindya Chattopadhyay that features industry’s three fresh faces- Susmita, Sweta and Soumya.

The trailer of the film, released on Friday, clearly reflects the sizzling chemistry between the trio in the film.

Packed with various elements of romance and drama, Prem Tame is slated to release in February next year.

“Prem Tame” is a story of a revolution: within a young heart, inside a home, and in society.

The story revolves around Pablo, a dreamy-eyed college-goer, who was suspended from college because of an incident. He then sets on a journey of finding himself. In this journey, he even meets a girl and how he falls for unconditional love.

Soumya Mukherjee is seen to play the role of Pablo, while Susmita and Sweta are playing the characters of Raji and Arshi respectively- the two girls who get involved with Pablo in the film.

The official posters of the film have been released together and have grabbed overwhelming attention from people.

Excited about the release of his film, Anindya Chattopadhyay, director of Prem Tame, said: “Though Prem Tame shows a love, hate, friendship amongst college students, it isn’t a typical love story that audiences are accustomed to. However, the context is very relevant and relatable, taking one back to their college memories."

"Prem Tame is one very special project for me and I was extremely hopeful throughout its making. I like working with fresh young talents and thus have decided to cast the three of them. Soumya, Susmita and Sweta have done a great job in the film. I hope the film, releasing during the valentine’s week, will help stirring romance in the minds of the audience.”

Mahendra Soni, Co-founder and director of SVF, said, “This is our first collaboration with Director Anindya Chattopadhyay and we are elated to present Prem Tame. The story is very catchy and engaging- something that audience would relate to, yet have something new on their plate.  We look forward to releasing the film during Valentine’s week to celebrate love in the best way possible."

The trailer of Prem Tame can be watched here: http://bit.ly/PremTame_OfficialTrailer