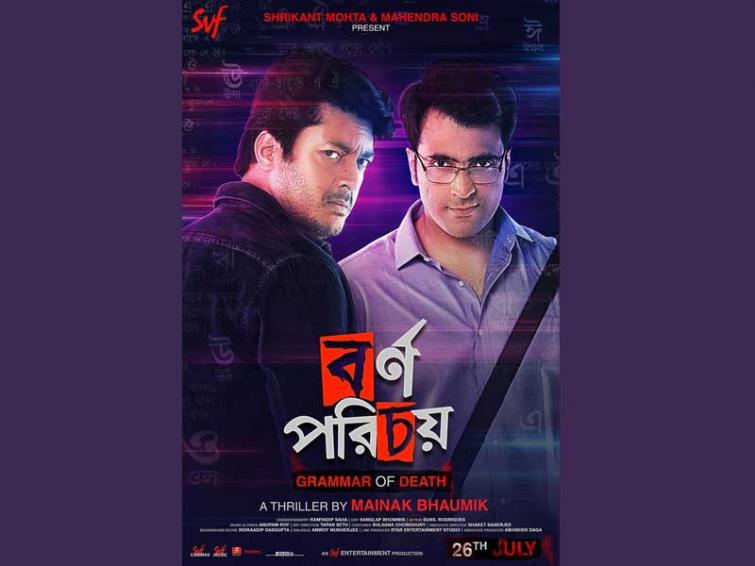 Kolkata,  July 26 (IBNS): Director Mainak Bhaumik’s dizzying thriller Bornoporichoy, that brings Jisshu U Sengupta and Abir Chatterjee face to face for the first time, releases across the country on Friday.

Mainak Bhaumik ventures into the forte of thriller for the first time with Bornoporichoy, a roller coaster ride that studies the grammar of death. The film is an adventure of good vs evil. Arko (Abir Chatterjee), a man who has nothing to lose and Dhananjoy (Jisshu U Sengupta), a man who lost everything, locked in a gripping chase.

While Arko goes on a killing spree which always end up in riddles, Dhananjoy, loses his family and job as he becomes obsessed in trying to uncover the truth.

Excited about the national release of his film, actor Jisshu U Sengupta goes on to say: “This is the first time the audience will get to witness an onscreen chemistry between Abir & myself and it’s worth a watch. We both play characters that have shades of grey and I’m sure the audience across the country will enjoy it.”

Actor Abir Chatterjee ecstatically goes on to say “I’ve been getting a lot of requests from friends and families residing outside Kolkata about the release date of Bornoporichoy. Finally, the audience who enjoy good Bengali Cinema across the India will get to see the thriller film with a unique equation between me and Jisshu.”

The film also stars Priyanka Sarkar in pivotal roles and the music has been composed by acclaimed musician Anupam Roy.