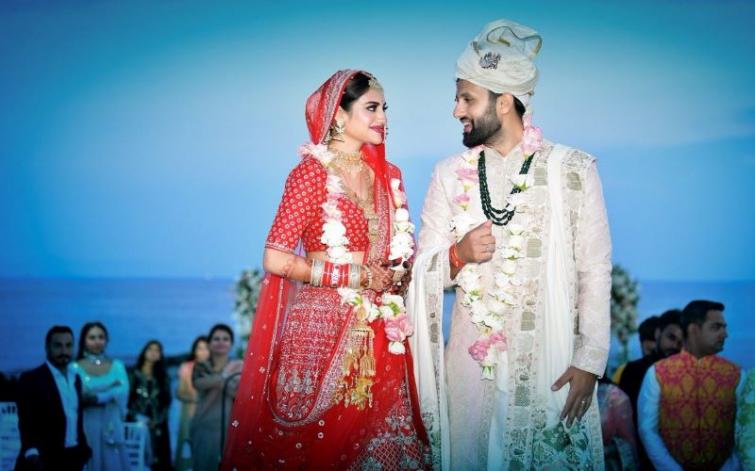 Bodrum, June 20 (IBNS): First-time parliamentarian Nusrat Jahan, who is one of the top heroines of the Bengali film industry known as Tollywood, has got married with businessman Nikhil Jain away from media glares at Bodrum in Turkey.

Twenty-nine-year-old Jahan, who was picked up by West Bengal Chief Minister Mamata Banerjee as a Lok Sabha candidate for the Trinamool Congress (TMC), posted an image on Twitter where she is with Jain smiling at each other. The Tollywood star is seen wearing a red lehenga choli while Jain wore a light-coloured sherwani.

"Towards a happily ever after with Nikhil Jain " the actress captioned the image.

Towards a happily ever after with Nikhil Jain â¤ï¸ pic.twitter.com/yqo8xHqohj

Jahan, who has so far acted in 16 films, had contested as a TMC candidate from West Bengal's Basirhat constituency and won by a margin of over three lakh votes.

It is because of the marriage ceremony, Jahan could not take oath as the MP in the Lok Sabha.

U taught me humanity.. took each n every care of my happiness.. i will nvr let u and ur principles down.. I love u Daddy... May all daughters get a father like u.. Happy fathers day..!! ðŸ’“

Jahan's close friend and Tollywood actress Mimi Chakraborty, who is also a first-time TMC MP, had attended the ceremony. Chakraborty, who represents West Bengal's Jadavpur constituency, too missed the oath-taking ceremony in the parliament.

Jahan is expected to throw a reception ceremony in Kolkata on July 4. The ceremony is likely to be attended by Tollywood stars as well as political leaders.