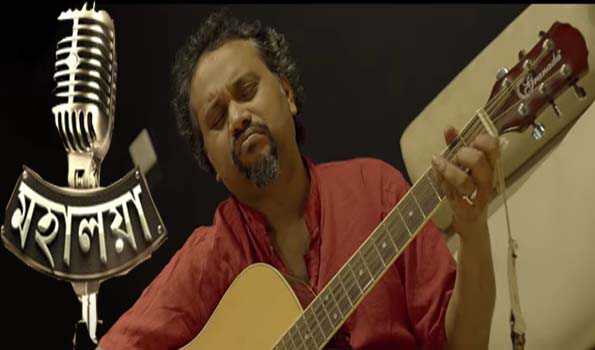 Mahalaya' is a confluence of historical nostalgia and artistic excellence

Kolkata, Mar 3 (UNI) A concrete research work, an engrossing script, a slice of history marinated with nostalgia and artistic excellence is all about 'Mahalaya'. Soumik Sen, with his first Bengali film is a clean sheet winner.

Thrashing all the buzzes of biopic theory, the film successfully portrayed a hardly known true incident during the emergency period which is very Bengali in feeling. From 1931 onwards, Akashvani Kolkata has been broadcasting 'Mahisasurmardini' with the chanting by Birendra Krishna Bhadra and music by Pankaj Kumar Mullick.

In 1976, during emergency Aashvani Kolkata suddenly replaced the programme by 'Devi Durgatiharini', where the voice of Mr. Bhadra had been replaced by Mahanayak Uttamkumar. But the mass outrage forced Akashvani to broadcast the 'Mahisasurmardini' again with reinstating Birendra Krishna Bhadra. Soumik touched the feeling with a pure honesty. 'Mahalaya' is a riveting film that will force the audiences to concentrate on the facts and consequences, not on that who is playing Uttam Kumar. Here comes the success.

Subhasish Mukherjee, as Birendra Krishna Bhadra delivered one of his most remarkable performances. His dialogue throwing is next to the best. Shubhomoy Chatterjee is brilliant as Pankaj Mullick and he is the surprise package of 'Mahalaya', it is also a new life for him and pouring more of significant offers is likely to be knocking his door.

Prosenjit, who is also the producer of the film, played a rude bureaucrat in the film will leave one irritated and angry. Such poignant performance by the icon.

Jisshu is top notch in this historical nostalgic slice. His portrayal of Uttam Kumar with an unique attire and voice modulation made the film a more of a classic. Jisshu haven't tried to be Uttam Kumar on screen and he succeeded in his own way of portraying Bengal's all time favourite matinee idol.

Along with them Saptarshi Roy, Kanchan Mullick and Rana Basu Thakur delivered their respected roles in very commendable manner.

'Mahalaya' is a brilliantly executed and chronicled period film with extreme precision. It will help the future researcher is for sure. It's a must watch for every Bengali to relate their nostalgia.