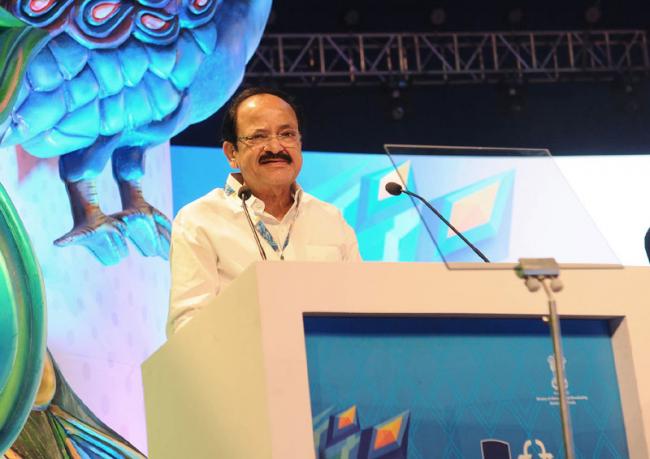 It should focus on promoting national consciousness and social integration as cinema is religion without boundaries.


Films should illuminate the mind and heart, engaging audience both intellectually and emotionally. It should expose the people to ideas, problems and developments happening in the society and make them think critically and look for alternate solutions and actions.


In a country like India, with its several social problems, a case could be made for social realism in our films. Cinema was a work of art and there has to be a certain ‘take away’ for the audience who gave over two hours of their valuable time for watching a film.


The Minister said this while delivering his address at the inaugural ceremony of the 47th edition of International Film Festival of India which began in Goa today.

Elaborating further about the role of cinema and social change, Naidu said that demonetization scheme of the Government was a national project of behavioral change of an unprecedented scale and urged the film makers to analyze and present the consequences of this change to the people in a creative manner.


He further mentioned about 1946 movie ‘Vijayalakshmi’ produced and directed by late B.R.Pantulu which was based on the first demonetization in our country.


The movie had brilliantly presented the negative role of money sharks working for their own interest at the cost of the common man.


Naidu said that the situation today was also similar and hence the Prime Minister for this very reason had set in motion the current process of change that would bring benefits to the citizens of the country.

The International Jury for IFFI 2016

Ivan Passer (ivan passer)- Chairperson (Czech Republic, USA) - internationally acclaimed Writer and Director, he is a significant figure in the Czech New Wave of the mid-1960s and collaborated as a writer with legendary filmmaker MilosForman (Miloš Forman ) in Oscar nominated films, A loves of a blonde (1965) and Fireman’s blonde (1967). He has received Special Prize for Outstanding Contribution to World Cinema at Karlovy Vary International Film Festival

Lordan Zafranovic (lordan zafra-novich) - Member (Croatia) - internationally acclaimed Writer and Director. His most important work is the cult film Occupation in 26 Pictures (1978). ZafranoviÄ‡ has been praised as "one of the great masters of modernism. He started his feature film career by directing film, Sunday (1969). His documentaries Eyes of Beijing (2003) and China’s Terracotta Warriors (2003)won awards for best director at the Belgrade Festival of Documentary and short film. Documentary and experimental film Symphony of the Heaven City (2004) won the UNESCO Prize for the best documentary in 2004

Nagesh Kukunoor - Member (India) - Internationally acclaimed filmmaker from India, Kukunoor is known for his narrative style and distinct scripts. Hyderabad Blues 1&2, Rockford, Iqbal and Dor are some of his most acclaimed films.

IFFI 2016 would also organize a special tribute section in the memory of Polish filmmaker Andrzej Wajda (andre wajda) and Iranian filmmaker Abbas Kiarostami (abbaas kirastomi) , who passed away this year.

The 47th edition of IFFI would screen three films for specially-abled children with special audio described technology under the Accessible India Campaign/ Sugamaya Bharat Abhiyan. This screening would take place in collaboration with UNESCO and Saksham.

Inspired by the Government’s Clean India Drive, IFFI 2016 would showcase a special package of 20 award winning short films based on the Swachh Bharat theme. These 20 films were short listed from 4,346 entries and awarded at the ‘Swachh BharatFilm Festival’ organized by National Film Development Corporation on 2nd October in New Delhi.

At 47th IFFI, National Film Archive of India has also organized a Multi-Media Exhibition on the theme ‘Azadi 70 Saal: YaadKaro Qurbani’, to commemorate 70 years of India’s Independence and its depiction through films.

One minute silence was observed at the start of the IFFI 2016 inaugural ceremony for the people who lost their lives in the tragic train accident today.

The 47th edition of the International Film Festival of India would continue up to November 28th, 2016.  The film festival besides showcasing films from across the globe would also bring interactive sessions, workshops and informative classes from global masters of the art in Direction, Documentary film making, Editing, Art Direction, Cinematography, VFX & Animation and Action Direction.