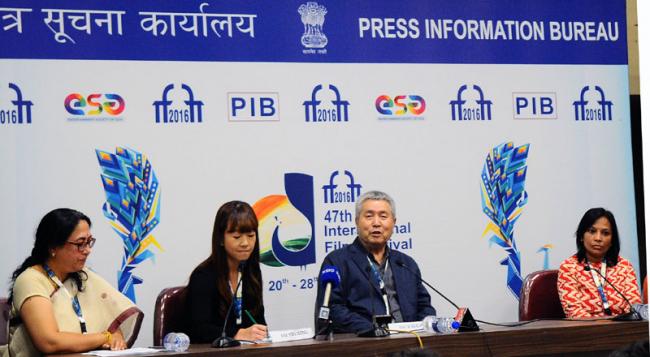 Regarded as the father of Korean cinema for his long and prolific career and his work on Korean themes and subjects, Im Kwon Taek has been honoured with several national and international awards.

Addressing the press in Goa on Sunday, Im Kwon Teak said that he is very happy to receive such an honour, but he personally feels that he has not created a masterpiece yet and this award is a message to make better films in the future to come.

His career spans more than 5 decades and he has made more than 100 films. In 2010, Im directed his 101th feature, ‘Hanji’ and his 102th feature, ‘Revivre’ in 2014, which was presented in non-competition section of Venice Film Festival. He received the Lifetime Achievement Award at Asian Film Awards in 2015.

Talking about the Indian cinema, Im Kwon Taek said that he is fond of the work of Shahrukh Khan and liked 3 Idiots and Slumdog Millionaire. Responding to a question on influence of India on Korean films, he informed that he too has made a film on Buddha and reincarnation. It would be a great opportunity to co-produce films with India, he added.

Sharing his experience with media, the Director said that he visited India twenty years ago to attend a festival in Trivandrum. At that time he felt like returning home due to cultural difference, but once back home he missed the distinct culture of India.

Im Kwon Taek, was born in 1934 in Jangseong, Jeollanamdo.

He made about 50 films within a decade, when he studied a variety of film genres including melodrama, musical, action cinema, thriller and comedy from Hollywood and Hong Kong cinema.

He was recognized as the leading director of Korean cinema in 1980s.

In 2000s, he directed Chunhyang (2000), the first Korean film in the competition of Cannes Film Festival and Chihwaseon (2002) that won the Best Director Award in Cannes.