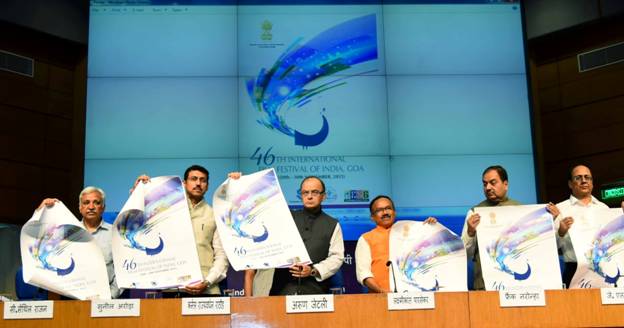 IFFI platform a Global Brand in the World of Cinema: Arun Jaitley

It promoted excellence and provided an opportunity to showcase the best domestic and international talent.

The Minister said this while addressing the curtain raiser press conference on International Film Festival of India -2015.

Elaborating on the festival profile, Jaitley said the film festival would showcase 187 films from 89 countries in World Cinema section along with 26 Feature and 21 Non-Feature films in Indian Panorama section.

Anil Kapoor would be the Chief Guest at the opening ceremony.

The opening film of IFFI 2015 would be ‘The Man Who Knew Infinity’ by Matthew Brown. The film was a true story of friendship between Indian Mathematician Ramanujan and Professor GH Hardy that forever changed the world of mathematics.

The films of master Spanish filmmakers Carlos Saura and Pedro Almadovar along with contemporary filmmakers like Alejandro Amenabar would be screened at the festival. The section would also feature Spanish actress Leticia Dolera’s directorial debut ‘Requirements to Be a Normal Person.’ The IFFI 2015 in the International Competition would include 15 films from across the globe.

He said this year IFFI would feature a special section on ‘World Cinema Restored Classics’ to highlight the idea of film restoration. This would feature a package of classics to put spotlight on National Film Heritage Mission (NFHM).

The Minister further said that the film festival would also introduce a new segment- ‘First Cut’ to recognize the young talent in the field of cinema and would screen some of the outstanding directorial debuts of 2015.

The section would feature emerging filmmakers including Brian Perkins (Film - Golden Kingdom, USA), Michael Klette (Film - Solness, Germany) among others.  The festival in association with the Oscar Academy would also promote skill development in film making through master classes on varied topics like sound designing, film archive and film editing.

Jaitley said that IFFI 2015 would also include special award - “ICFT- UNESCO Fellini Prize” in collaboration with the International Council for Film, Television and Audiovisual Communication (ICFT), Paris and UNESCO. The award would be presented to a film which reflects the ideals of peace, tolerance, non-violence and friendship promoted by UNESCO.

Jaitley also released the poster for the 46thInternational Film Festival at the press conference.

IFFI 2015 would also organize a special seminar on Film and Cultural diversity. A special series titled ‘In Conversation’ with eminent Indian filmmakers such as Shyam Benegal, Vettrimaran would be organized to discuss films and the art of filmmaking with the audience.

Organized by the Directorate of Film Festivals, Ministry of Information & Broadcasting, in association with the State Government of Goa, the International Film Festival of India is an endeavor to understand the various social and cultural ethos through the eyes of cinema. Moving from the artistic centers of Asia to the cinematic arena of the world, the festival’s founding principles focus on discovery, promotion and support of filmmaking of all genres, thus bringing together the diversity of the forms, aesthetics and contents. The festival has gained huge popularity amongst the global cinema lovers.