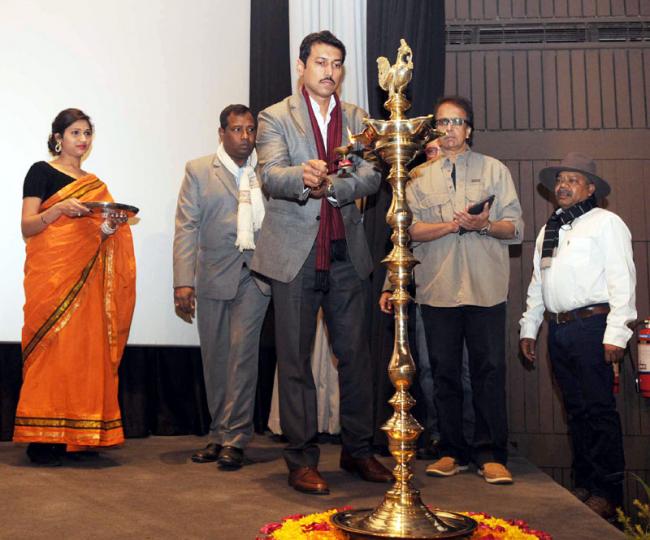 Siri Fort Auditorium amongst the top 50 auditoriums for cinema viewing in India: Rathore

India Blooms News Service | | 31 Jan 2015, 10:00 pm
#Siri Fort, # Siri Fort Auditorium amongst the top 50 auditoriums for cinema viewing in India
New Delhi, Jan 31 (IBNS) Minister of State for Information and Broadcasting Rajyavardhan Rathore on Saturday said the upgarded projection and sound facilities at Siri Fort Auditorium had positioned the venue amongst the top 50 auditoriums within the country that screened films for public viewing.

The renovated infrastructure reiterated the vision of the I&B Ministry to establish world class viewing facilities for screening films that incorporated technical brilliance in totality.

The Siri Fort auditorium had set high standards which were normally found in the corporate domain.

The digital projection and Dolby sound system would enable cinema lovers to enjoy a memorable viewing of movies.

The Minister stated this while inaugurating the Indian Panaroma film festival and the renovated facilities at the Siri Fort auditorium complex here.

Speaking further, the Minister mentioned that the Films representing the Indian Panaroma section had a profound impact on the different International Film Festivals abroad.

The effort would now focus on mainstreaming the impact of Indian Culture through the medium of Cinema.

The Ministry was keen on organizing Film festivals as films are carriers of culture, tradition and values.

Indian films had been a soft medium to reach out to a global audience.

More film festivals would be organized in the future and at the same time , there would be enhanced participation in the Film festivals abroad.

Also speaking on the occasion, Secretary I&B, Shri Bimal Julka said that the Indian Panaroma showcased high quality films abroad. The Panaroma section reiterated the power of Indian regional cinema. Films were the appropriate medium to celebrate India’s unity and diversity. The renovated facilities at Siri Fort had been done keeping in mind the needs of good viewing for Cinema lovers.

The Siri Fort Auditorium has lately gone through a complete make-over with state-of-the-art equipments being installed in the complex.

In the Plan Scheme 2013-2017, Ministry of Information & Broadcasting has made these efforts to modernize the Projection and Sound System of all the Four Auditoriums here.

The Ministry has spent nearly 5 crore rupees to make this prestigious Auditorium Complex of International standards.

Dolby Atmos is considered to be the best sound effects presently available in the globe and only a few theatres in India have this sound system. Besides, Siri Fort Complex has preserved the traditional 35 mm and 16 mm analogue projection to enjoy the old classics of Indian Cinema which are available in analogue format only.

It makes the Complex equipped to project films in both digital and analogue formats.

Besides technical upgradation, the security arrangements, auditorium roofs and sanitary fittings have also gone through re-modulling. Aesthetical upgradation of Auditorium –II has been done by providing new chairs, carpet and projection friendly look.

Organized by Directorate of Film Festivals, Ministry of Information and Broadcasting, the Festival would screen 26 Feature Films and 15 Non-Feature Films.

The Opening Film of the Festival was Gour Hari Dastaan – The Freedom File directed by Ananth Narayan Mahadevan.

The 8- day Festival would showcase all the films selected in the Indian Panorama section as part of the 45th International Film Festival of India, IFFI 2014.

The Director of the opening film and lead actor Vinay Pathak were present on the occasion.