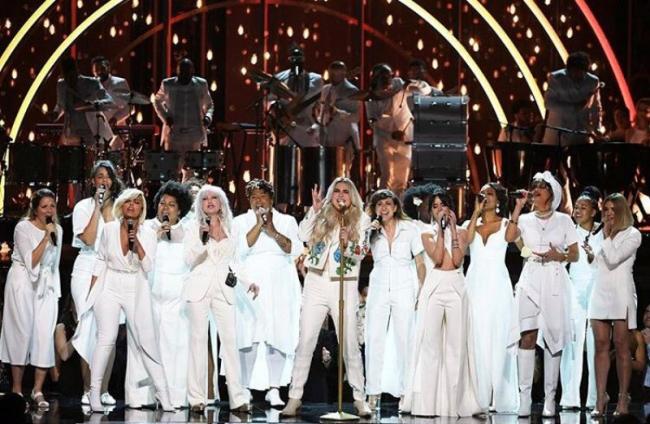 New York, Jan 29 (IBNS): If the Golden Globe Awards earlier this month was accentuated by a sea of black, white rose was the theme for Grammys 2018.

Almost everyone wore a white rose to show solidarity with #TimesUp, a movement against sexual harassment, founded on the new year's day by Hollywood celebrities in the aftermath of 2017 Weinstein scandal.

Recording artist Kesha led an all female group for a powerful performance. The group, dressed in white, sang an emotional single, Praying.

Janelle Monae, who introduced the act, said, "We come in peace, but we mean business. And to those who would dare try and silence us, we offer two words: Time’s Up."

"Because you see, it’s not just going on in Hollywood, it’s not just going on in Washington D.C., it’s going on in our industry as well. And just as we have the power to shape culture, we have the power to undo the culture that does not serve us well. So let’s work together, women and men, as a united music industry committed to creating more safe work environments, equal pay, and access for all women,” the singer/songwriter/actor added.