Asha Bajaj had an opportunity to discuss with Kat Kramer about some of the items donated for Kat’s brainchild SOUND & VISION-28 and learn about their significant origins.

Established on March 8, “SOUND & VISION-28” is a silent auction Kat Kramer created as a fundraising component of the 2021 Los Angeles Women’s Theatre Festival, which celebrates female voices, and women of impact.

“SOUND & VISION-28” celebrates both Women’s History Month, and the 28th Anniversary of the Los Angeles Women’s Theatre Festival (LAWTF), with its overall theme this year is AND STILL WE RISE!

It will be on display throughout the festival. 28 items to celebrate 28 years of solo performers from around the world, and the art of the one-person show. Some of the famous women donating items and memorabilia include former LAWTF Honorees, the Legendary Lily Tomlin, Jenifer Lewis, Lainie Kazan, and the late Diahann Carroll, who will receive the 2021 posthumous Infinity Award.

EXCERPTS OF AN INTERVIEW:

Can you briefly discuss Lily Tomlin’s items donated for the silent auction with special reference to ‘‘AN APOLOGY TO ELEPHANTS’, an award-winning HBO documentary about elephants and how humans need to protect them? Produced and narrated by Tomlin and written by Jane Wagner, Tomlin was a recipient of an Emmy award for Best Voice Narration of the HBO documentary. Can you describe briefly the origin of this HBO documentary?

Kat: Lily Tomlin is my performing idol and Ambassador for my cinema series “Kat Kramer’s Films That Change The World.” Lily donated most of the items including a “Grace And Frankie” script from Season 6 signed by Jane Fonda and Lily Tomlin. 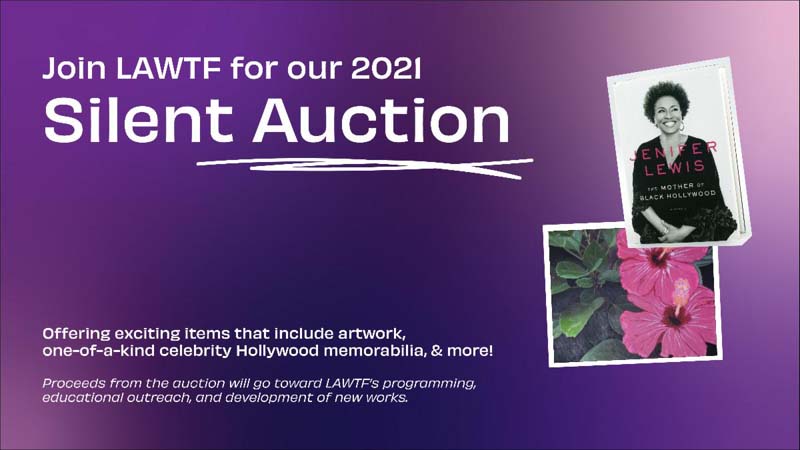 There is a DVD of “The Incredible Shrinking Woman” signed by star Lily Tomlin and writer Jane Wagner, and a DVD of my favorite Lily Tomlin film “Grandma” which Lily signed. In 2011, Lily Tomlin co-hosted with me, the world premiere of the documentary feature film “Elephants And Man: A Litany Of Tragedy” for the 3rd installment. It was a highly anticipated event, with tremendous press coverage, promoted internationally.

I was lucky to have Cher and Tippi Hedren on the Host Committee. The film explored how elephants are treated cruelly in zoos and circuses. Lily had been advocating for elephants for many years, and our main mission at the time was to spread awareness about “Billy” the elephant who was and is still being held in captivity at the Los Angeles Zoo. We were all part of the “Free Billy” campaign, which still exists to this day. Sadly, “Billy” is still here at the LA Zoo. But many zoos around the world have closed their elephant exhibits. Circuses have eliminated their elephant acts, and Ringling Bros. Circus has officially closed.

Lily was motivated to produce and narrate “An Apology To Elephants” for HBO Family to expose the inhumane treatment of elephants. She won an Emmy Award in 2013 for Best Voice Narration. I believe it has made a great impact. I’m currently working on producing original wildlife projects from young creators, with a focus on elephants, because I continue to advocate to protect our elephant friends. I also donated a signed CD of my version of “Bless The Beasts And Children” the theme song from my father’s animal rights film. I dedicate it to “animals and children” who have no “voice” and need our “love.”

It was re-imagined for future generations and I debut it for Circus PAWS (Performing Animal Welfare Society) and various Wildlife organizations, including when Lily Tomlin was honored by PETCO for her animal rights activism. It’s become an anthem for future generations of wildlife and animal advocates. Lily Tomlin also defines the solo performance genre and was previously honored with The Maverick Award from LAWTF. You autographed a DVD copy of an acclaimed indie film about diversity and inclusion, TURNOVER’ you co-starred/co-produced, and written and directed by Linda Palmer with a primarily female crew. You were the recipient of the Best Supporting Actress for the role of ‘Fran” at the 2019 Love International Film Festival. Can you throw more light on your role in the film and how did it relate to diversity and inclusion?

TURNOVER is an award-winning indie film, about a restaurant owner, who is going through a divorce and facing more than one challenge. It’s about how people need to join together as a community in a time of crisis. We won awards on the indie film festival circuit and launched on Amazon Prime during the pandemic. It’s ideal for families, and we received a 100% rating on Rotten Tomatoes. I don’t want to give away any details about my character of “Fran.” I encourage everyone to see this heartwarming film. The cast is diverse, and I adored the script by Linda Palmer and Laree Griffiths when I was first read it. There were 2 down syndrome characters, which is rare to see. I’m all about advocating for people with disabilities and authentic casting in the film. I advocate for the deaf community in the arts.

As a pre-teen, I played Helen Keller in a stage production of “The Miracle Worker.” I’ve been passionate about fostering the deaf and blind creatives in the entertainment industry at large, and give them representation. In TURNOVER, there is the character of “Julie” who was written as hearing in the screenplay. Linda Palmer (co-writer/director) and I decided to change her into a deaf character. I insisted on being authentic and casting a deaf actress. We are currently developing TURNOVER into a TV or web series. This family, foodie film featuring beloved characters who are misfits is just what viewers need to lift their spirits in the “new normal” post-pandemic world.

Please elaborate on the items donated for the silent auction by Diane Warren?

Kat: I’m thrilled that the fantastic songwriter Diane Warren donated rare items exclusively for “Sound & Vision-28.” She is a legendary songwriter, musician, and record producer. Diane just earned her 12th Academy Award nomination in the Best Original Song category for “lo Si (“Seen” from the acclaimed Netflix film “The Life Ahead” starring Sophia Loren. Ms. Warren recently won the Golden Globe for “Seen” and the memorabilia represented in the silent auction is unique and historical. The tee shirt “You Are Seen” representing the song “Seen” is signed by Diane Warren, with accompanying mask and sheet music.

Written by Jane Wagner, the award-winning play “The Search For Signs Of Intelligent Life In The Universe” was starred by Lily Tomlin. Both the play and its DVD version were signed by both Lily Tomlin and Jane Wagner. Can you explain in brief the theme and Tomlin’s role in this play for which she won the Best Actress Tony Award in 1986 and honored with the Maverick Award by LAWTF in 2004?

Kat: I wish I had seen “The Search For Signs Of Intelligent Life In The Universe” when Lily starred on Broadway. I missed her revival of the play, too. Jane Wagner wrote this modern classic for Lily, who won the Tony Award for her tour de force performance it won the Drama Desk and Outer Critics Circle Award. Tomlin portrayed multiple characters, male and female. The message of the play is simple: “We are all connected.” The paperback version is the 25th Anniversary edition. People who witnessed Lily’s brilliance in “The Search For Signs” recall a breathtaking journey in theatre. It also is a favorite work among feminists. To quote Gloria Steinem, “The Search For Signs” is….. “ A work of genius and compassion.”

Both Tomlin and Wagner signed the play and the DVD film version of “The Search For Signs.” Tomlin won a cable ace award for executive producing the screen version. Lily was recognized for her unique contributions as a solo artist when she received the Maverick Award from LAWTF in 2004. 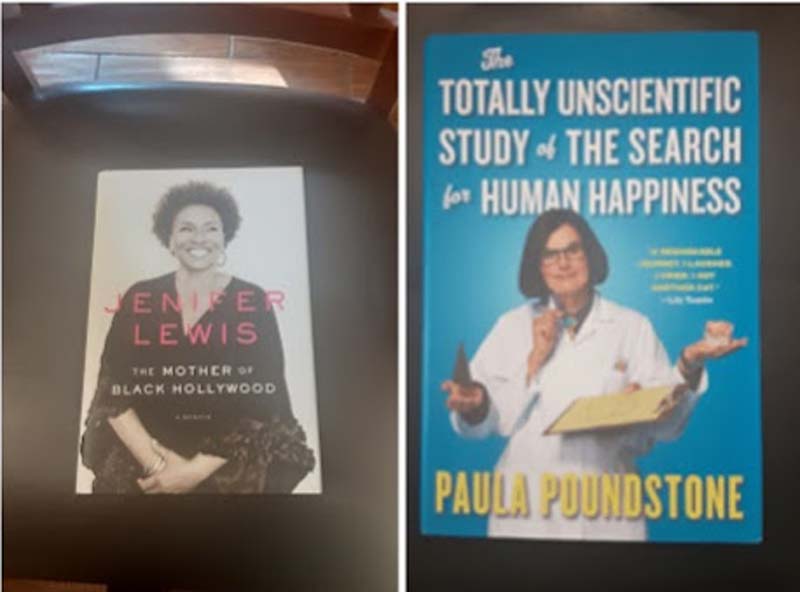 An original album- Lily Tomlin “On-Stage”- was recorded “Live” during her first Broadway solo show “Appearing Nitely.” The long play (LP) was signed by Tomlin, the first female to headline a solo show on Broadway. What influence did Tomlin’s solo show have on your being deeply immersed in the art of the one-person show? Highlight, in brief, the significant developmental changes in the solo show at present?

Kat: This is a rare album, and Lily Tomlin was the first female solo performer to headline a Broadway show. This was in 1977, before my time, so never had the chance to see “Appearing Nitely” either. Lily set a standard for solo performers. Critics agreed that it wasn’t stand-up, it wasn’t a play, it was a new genre difficult to categorize. Basically Lily created “performance art.” She won her first special Tony Award. Since I personally never saw Lily perform either “Appearing Nitely” or “The Search For Signs” I needed to see her “live” so I could learn and watch a great trailblazer in the arts. I’ve been lucky to be able to watch Lily perform “live” 18 times in her most recent solo endeavor “An Evening Of Classic Lily Tomlin.” It has definitely inspired all my solo work and she defines the genre for me. As far as developmental changes to the art of solo performance, I would have to say technology has given more opportunity for any “live” performing. Since COVID-19 shut down theatres and performance venues, the virtual world has been the only chance for any theatrical work to be seen. Stellar for example is giving our solo artists a chance to perform their shows for LAWTF.

In my opinion, nothing beats the sublime experience of performing a solo show “live” in front of people. There’s nothing like that human exchange between the solo performer “going it alone”, and the audience.