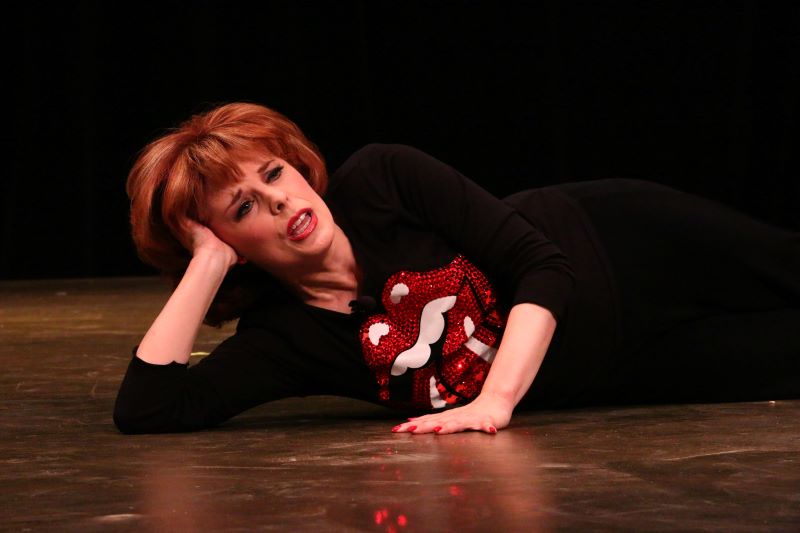 Los Angeles/IBNS: "MY DUET WITH MICK" is an original one-person- musical-solo-show- "work-in-progress" that follows Katharine "Kat" Kramer's journey down 'Rolling Stones Road" to meet the great and powerful Sir Mick of Jagger.

Along the way, in this excerpt, Kat meets some unique characters and makes an important discovery about herself.

Kat is an actress, singer, journalist, producer, and activist, who presents her compelling arguments for her desire to sing a duet with Sir Mick Jagger, the iconic English singer, songwriter, actor, film producer, and one of the founding members of The Rolling Stones, a rock band formed in London in 1962.

For decades, The Rolling Stones has been "The World's Greatest Rock N' Roll Band." They are now firmly cemented as Rock Royalty.  Mick Jagger is arguably the greatest frontman in Rock N' Roll History.

Along with Keith Richards' guitar style, Mick with his distinctive voice and energetic live performances has been the trademark of the Rolling Stones throughout the band's career.

Kat  Kramer has recorded an album of Mick Jagger songs, from some of his solo albums. She focuses on mostly ballads and Jagger's more romantic compositions. She has included a Keith Richards solo song, and a couple of obscure Stones tunes. It's a "passion project " of Kat's called GEMSTONE:  Kat Kramer Sings Mick Jagger... and Keith Richards."

Kat’s Performance of her solo journey is a parody of  "The Wizard Of Oz,” a family classic musical movie and science fiction, winner of Academy Awards for the classic song, "Somewhere Over The Rainbow" and for "Best Score." Many consider the 1939 film to be one of the greatest movies ever made. Judy Garland, winner of a special Oscar for "the best juvenile performer of the year" stars in "The Wizard Of Oz,” as Dorothy Gale, a young Kansas farm girl whose dreams of a land "somewhere over the rainbow" comes true when she, her dog, Toto, and her family's house are transported by a tornado to the land of Oz to implore the all-powerful Wizard of Oz for his help to return home.

The central  message in the ever-evolving journey of "My Duet With Mick" is....."there's no place like home."

Kat performed an excerpt of her solo journey for the Los Angeles Women's Theatre Festival, as a "work-in-progress", where she portrays all the characters. She did bring along her musical director Shelly Markham, who shares the journey by backing Kat on the keyboards.

Kat's show is a unique mixture of stand-up, song parodies, and one-liners that all relate to her love of Mick Jagger and the Stones. She confides to the audience that although Mick has accomplished everything in his life, he still has one major opportunity to pursue and that he has never recorded a duet with Kate.

There's plenty of humor, for example, Kat says" the  last thing I want from Mick, at the end of his life is to be lying on his death bed (Kat lies on the ground) and say, “if only I had done that one duet with Katharine Kramer.”

Kat proves with her amazing voice and touching performance of the song, 'As Tears Go By,’  a song written by Mick Jagger, Keith Richards, and Rolling Stones' manager Andrew Loog Oldham  -- that she is an excellent and worthy match for any duet with Sir Jagger.

While telling the audience that she was named for her Godmother "Katharine Hepburn" whom she calls "Auntie Kate" or "Auntie Kat" depending on her mood. She suddenly hears the voice of "Auntie Kate" from the heavens above. Of course, Kat the actress plays both parts, and "Auntie Kate" becomes her "alter-ego" and substitute parody of "Auntie Em" from "The Wizard Of Oz."  During the conversation, Auntie Kate encourages Kat by saying, “But you must follow your heart and your dream just like Mick Jagger to get any satisfaction.” A reference to the Stones anthem and legendary song.

Just like Dorothy's dream in "The Wizard Of Oz,” comes true when she, her dog, Toto, and her family's house are transported by a tornado to the land of Oz, in Kat's solo performance also an earthquake transports Kat and Shelly to a strange and beautiful land. “We must be 2000 light-years from home,” says Kat, another Stones song title fits perfectly into the almost psychedelic-vibe.

Kate suddenly hears another voice saying, “are you looking to shine a light?” This is in reference to the documentary musical event "Shine A Light" directed by Martin Scorsese which is named after a famous Rolling Stones song from their most critically acclaimed album "Exile On Main Street."

Kat becomes Ruby Tuesday, the other person from the world of fantasy who guides her to follow the Rolling Stones. Ruby is like Glinda, the Good Witch. Kat makes use of a pun and says, “I told you I have been following the rolling stones my entire life…I know because a rolling stone gathers no moss.”  Ruby clarifies that Kat should dig under her feet to get to her destination implying that Kat needs to work harder.

During the beginning of her conversation with Auntie Kate when Kat asks her, "Does this mean you approve of my performing career?," Auntie Kate replies, "Of course not. Now I see a xerox copy of everybody else. In my days we were individuals, unique."Towards the end Auntie Kate's words of advice to Kat, “To find Rolling Stones Road first you have to move like Jagger,” reveals Auntie Kate is convinced that Kat has followed her previous advice, “But you must follow your heart and your dream just like Mick Jagger to get any satisfaction.” There's that song reference again.

Kat begins her free dancing style to the Maroon 5 song "Moves Like Jagger"  and is transported to her destination Gem Stone City, (parody of Emerald City)  where she can finally find "Sir Mick Of Jagger,"  She dreams of being Jagger's back-up singer and performing that duet.

In this solo journey performance, Kat also reveals how her dedicated hard work to reach one's dream in unison with her spiritual inspiration from her ancestors enables her to move just like Mick which adds elements of inspiration, perseverance, hard work to the world of fantasy and science fiction to the continuing solo journey.

Co-founded by Adilah Barnes and Miriam Reed, LAWTF is celebrating the 28th Anniversary as a virtual event March 25th-30th 2021. LAWTF is the longest-running female solo theatre festival in Los Angeles, dedicated to nurturing and producing over 600 solo artists to date. The 2021 theme of the 28th Annual LAWTF Gala is "And Still We Rise." Kat will co-host along with Iona Morris, an evening of performances, called "BOXED IN, SET FREE featured on Stellar, Monday, March 29th, 2021 at 7 pm. Kat also created a silent auction as a fundraising component of this year's festival, "SOUND & VISION-28" which celebrates female voices, and women of impact.

"SOUND & VISION -28"  will launch on March 8th, to celebrate International Women's  Day. It will be on display throughout the festival.  28 items to celebrate 28 years of solo performers from around the world, and the art of the one-person show.

Some of the famous women donating items and memorabilia include former LAWTF Honorees, the Legendary Lily Tomlin, Jenifer Lewis, Lainie Kazan, and the late Diahann Carroll, who will receive the 2021 posthumous Infinity Award.

Clearly, Kat is a performer of "Sound and Vision" and plans to launch her full solo journey for LAWTF and other Solo performance organizations. Her dream is to play "The Kate" in Old Saybrook, Connecticut, which is the performing arts venue named in honor of her Godmother, "Auntie Kate" herself, Katharine Hepburn.

(This special episode is reviewed by Asha Bajaj)