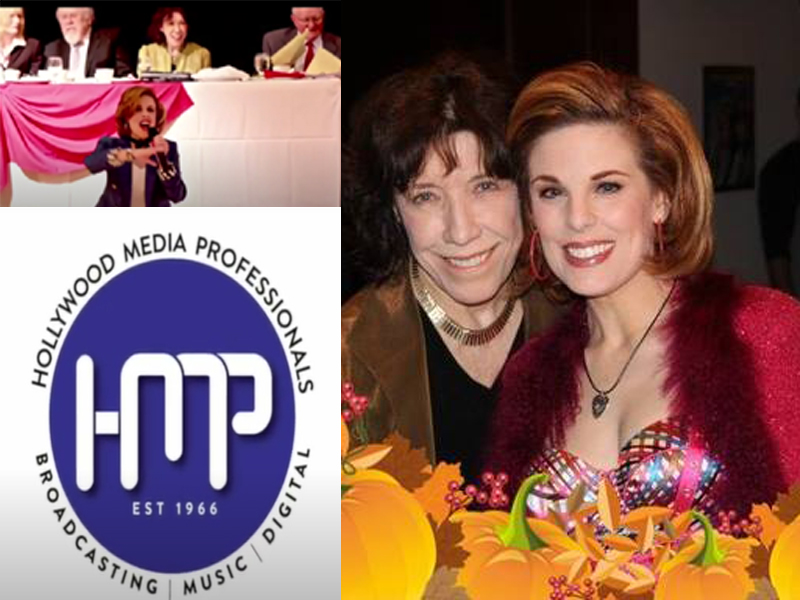 Los Angeles/ IBNS: A new weekly YouTube series HMP Celebrity Showcase was kicked off on Dec 6, 2020, by a performance by Katharine "Kat" Kramer, an actress, singer, journalist, producer, and activist to honor Lily Tomlin, the award-winning actress, writer, and comedienne.

HMP Celebrity Showcase, with its short segments, was launched to honor the contributors' rich broadcasting history by devoting each month to honoring a single celebrity, and Lily Tomlin, was selected as the "first" Honoree of the Month.

A special episode selected from Lily Tomlin's awards luncheon, held at The Sportsman's Lodge in Los Angeles, Feb 17, 2012, was premiered by Hollywood Media Professionals (HMP)  to launch the HMP Celebrity Showcase by featuring an original musical parody for Lily, written and performed by Kat.

Kat started her special tribute by telling the crowd that all her life she had been dreaming of the day she would “open for Lily Tomlin at the pioneer lunch, right here in Studio City” a humorous reference to the fact Kat Kramer always aspired to be the opening act for Lily Tomlin on the road.

At last, Kat had the great chance to open the program when Lily was honored with the prestigious Art Gilmore Award at the Pioneer Luncheon presented by the Pacific Pioneer Broadcasters (PPB), which has been honoring entertainment, music, and broadcasting legends since 1966.  Art Gilmore actually founded the PPB in 1966.

“Dear Lily Tomlin, I am singing this to you"  Kat serenaded the audience of 400 entertainment industry and broadcasting veterans, in a parody version of the Judy Garland song classic "You Made Me Love You" which Judy sang to Clark Gable back in the 1930s.

Kat also sang to Lily, "You're a song that sings delight with every verse, perhaps the lone intelligence in the universe. That’s how you made us love you."

Kat incorporated a special pattern in her salute, acknowledging that Lily made everyone love her because of the work she did as an advocate for animal welfare, rescue for elephants in captivity, and protecting wildlife.

"And I just love your social conscience and the way you protect endangered elephants...You really have changed the world. Everything that you do makes our world a much better place."

Indeed. Since Kat Kramer performed her special musical salute "Dear Lily Tomlin" Lily herself has participated in 5 screening events for "Kat Kramer's Films That Change The World" and is the leading Ambassador for the cinema series.

The HMP Celebrity Showcase is a unique YouTube channel in that it highlights Legends in Show Business, and gives viewers an inside look into exclusive Pioneer Luncheons, which are similar to Friars Club roasts and toasts.

Kat Kramer is the ideal performer to kickoff the channel because she is a throwback to the good old days of "live" performing, pure old-fashioned show business. HMP, a division of PPB, elevates to promote media and music through education and mentorship.