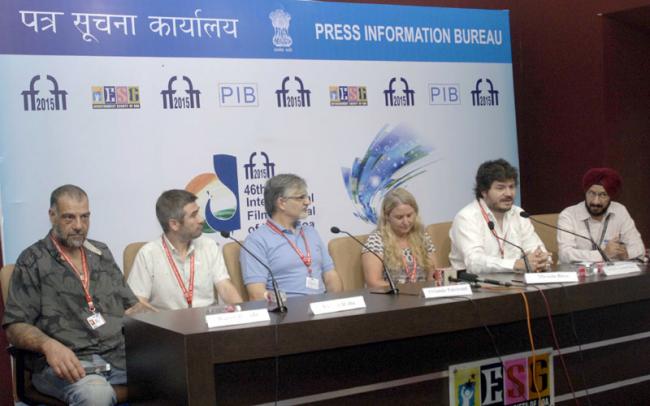 Many stalwarts, including Shyam Benegal Ilayaraja, Subhash Ghai, Rakesh Omprakash Mehra, Shekhar Kapoor, Shankar Mahadevan,  Jackie Shroff, from the film industry visited the exhibition and applauded the efforts of the Ministry of I & B in implementing this project that aims to preserve country’s cinematic heritage.

The festival delegates and general public visited the exhibition in large numbers and relived the nostalgic moments through re-designed posters of classic movies restored by NFAI.  The exhibition was inaugurated by Minister of State for I & B, Col Rajyavardhan Rathore.

The Multi-Media Exhibition was curated with a theme of National Film Heritage Mission, a prestigious project of Government of India, for Preservation of Filmic Heritage of the Country.

The Mission aims at Preservation, Conservation, Digitisation and Restoration of film and filmic material. The exhibition organized by National Film Archive of India (NFAI) encompasses posters and audio-visual content from the ‘Restored Classics’ of NFAI along with technical presentations explaining the processes of film restoration.

“The Exhibition is an attempt to create anawareness about the importance of Film Preservation and Restoration. It has been appreciated by all the stakeholders and received huge response at IFFI this year," said Prakash Magdum, Director NFAI.

Earlier, during inauguration, NFAI has also launched the Signature film on NFHM directed by Pune based film-maker  Ajit Wadikar.

The 3-minute film was created with a concept of ‘Cinema is Immortal, only if, it is preserved’.

Milt Shefter, a leading film preservationist and Oscar Academy representative at IFFI, had appreciated NFHM signature film and used it during his Film Preservation workshop at IFFI.

On the sidelines of exhibition, NFAI has also utilized Customer Engagement platform based on the concept of gamification, which was developed by two IIM pass-outs and entrepreneurs  Rushikesh Humbe and  Vjiay Kawale. The platform named zenkast.com, was used to engage the visitors at Exhibition and helped in identifying peoples’ choice for the posters.

India is one of few Countries, implementing, the Film Preservation and Restoration, at such a massive level, in a Mission Mode, time bound manner. NFAI has already restored nearly 300 films and digitized nearly 500 films. The exhibition displayed 80 posters and 25 audio-visual clips from the Restored films of NFAI.