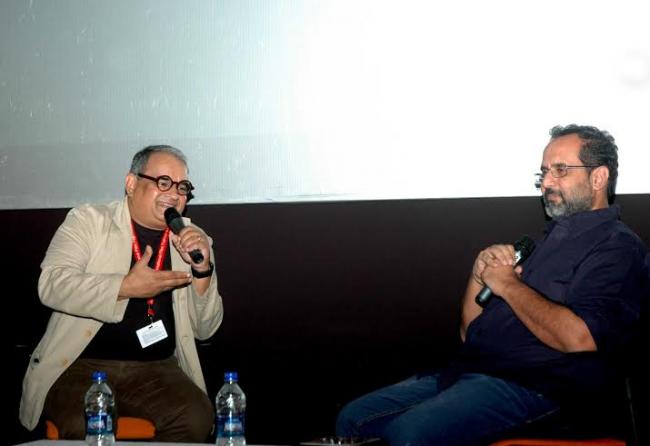 "In Conversation" - a blockbuster series at IFFI 2015

With its newly introduced special series titled “In Conversation”, the festival has been able to bridge the gap between the audience and the filmmakers and create a platform for discussion on art and craft of films.

The series started off with director Shyam Benegal who has been credited with the introduction of the ‘New Cinema’ genre in India.

Talking about the future of cinema, the ace filmmaker said, “In the last 40 years the means of getting to see a film has increased. Additionally, the original definition of cinema – that of screening movies in a theatre hall – has changed to that of TV, computers and mobiles. The idiom and grammar of cinema itself is changing, but the expression continues to be the kind that was seen in the large format films I opined. There are many kinds of cinema now. The sharp definitions of cinema are not applicable today.”

Speaking to the audience, Rajkumar Hirani, the director of mass-entertaining films like PK, 3 Idiots and Munna Bhai MBBS said, “A film is being made on writing table and editing table. An editor is an unsung hero because his work is not visible. A good editing creates an emotional impact in audience’s mind and an editor really creates emotions out of shots. A good script is the soul of a film so one should collect lots of material and do a deep research on the theme and subject of the film.” He also expressed that animated film is something that he really wants to make in the coming time.

Talking about the humour films, the king of comedy films and National Award winner, Priyadarshan said, “Situations can make a film humorous and that is why I want my actors to behave rather than act. My filmmaking is influenced by the comics as I used to read lots of comics in my childhood days. I think comics are the excellent source to learn the cinema and helped me to build sense of humour for my films.” He said that I enjoy making cinema. As soon as my current film releases, I start working on my next project.

Communicating on the rising status of regional cinema, the National Award winning director Kaushik Ganguly said, “Regional cinema is really doing wonders and has become a powerful medium to bring change in society. Indie filmmakers has changed the pattern of storytelling. This is true that single screen theatres have good heritage value of cinema and I am happy with the feedback that my film Cinemawala has received at IFFI. The film is about a father-son relationship set against the backdrop of a defunct movie hall.” He also stated that he wanted to be an actor and had the passion for acting since his childhood.

Sharing the journey of becoming a filmmaker, the promoter of realistic cinema and National Award winning director Madhur Bhandarkar said, “I come from a middle class family in Khar. Though I have not studied after 6th class, I have been an avid reader. Before stepping into filmmaking, I worked as a video cassette delivery boy for 4 years and used to watch films on DVD in one of my friend's house.” He added that success ratio in the film industry is 99% failure. He was ready to do TV serials if my film ‘Chandni Bar’ didn't work.

Sharing tips on filmmaking, Vettrimaran, the director of National Award winning Tamil film Aadukalam said, “In filmmaking, a director needs to push the second half to another level to captivate the audience even after they leave the cinema hall. The difference between a professional and beginner is that a beginner wants to tell everything in the first film. Tamil is the only language in the world where there is no parallel cinema movement. Dhanush is a constant factor in my films because of the mutual trust we have for each other. I make the film keeping myself in mind and Dhanush can easily replace me.” He informed that I am really wanting to do something like Games of Thrones but it's not possible as I heard that one episode of Games of Thrones cost about 35 crores.

Talking about his next project, the director of cult films like ‘Raanjhanaa’ and ‘Tanu Weds Manu’ Anand L. Rai said, “My new film is about a boy from Meerut and a girl from Delhi who is a dentist. I find stories in small cities and create characters that more common and can connect well with the audience. Both the actors in my films have 3 ft. height and the film is going to be a real excitement for me to as keeping it real, I am technicality challenging myself to go beyond my comfort area. A director should keep challenging himself with each film.”