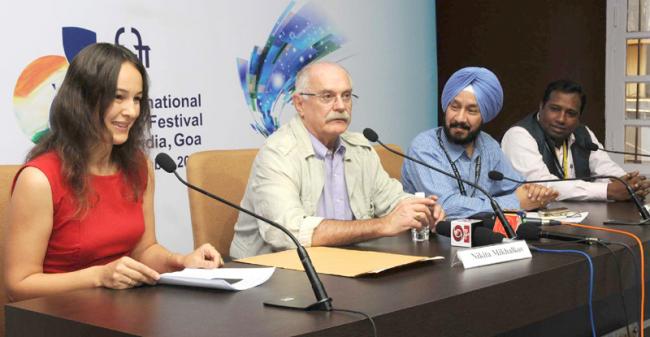 Indian cinema has impacted me a lot: Mikhalkov

He said Love and tenderness shown in the films of Raj Kapoor had influenced him since his childhood.

Humming the famous song ‘Awara’, from Raj Kapoor’s film, he commented that it is the best way he could explain his love for Indian movies.

He said, “Indian cinema is an entirely different planet for me.”

Addressing media person at IFFI 46 at Goa,   Mikhalkov commented, “A film becomes an international film when it is truly national and cultural oriented.”

Replying a question about the violence in today world, he got emotional and said has advocated love and passion through his work.

He said,“The world has died of its own greed, people value money more than emotions, this leads to violence and aggression”.

Speaking more about his work he said his films are comment on the life of particular time, not on any political system.

He said he does not like to follow strict set of format of film making as he feels movies should have the freedom to breath.