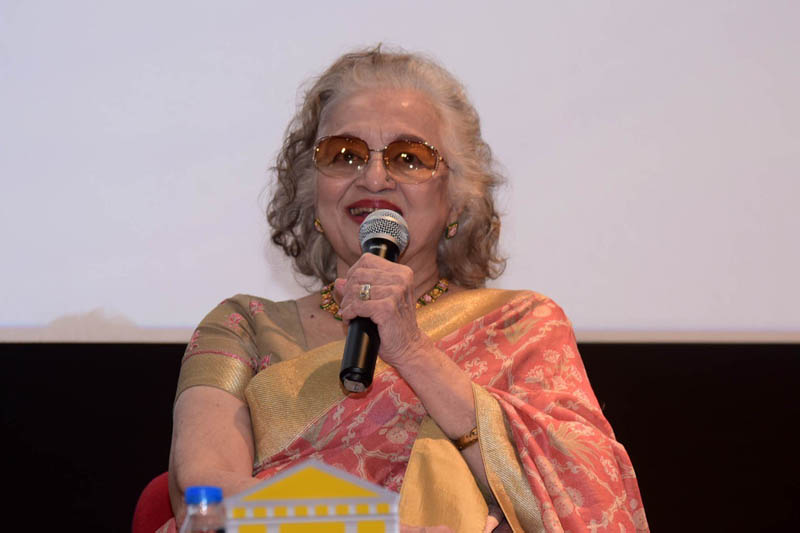 Panaji: Sharing her experience of getting honoured with Dadasaheb Phalke Award for the year 2020, legendary actress Asha Parekh said that it’s a long time after which a lady has been accorded with this award.

Expressing the surprise and pleasure over receiving the Award, she said, “I am also the first Gujarati to get this award. So, it was a great thing for me but for 2 days it didn’t registered in mind. I was thankful firstly to God because it was too big a surprise for me."

Asha Parekh was speaking during the In-Conversation session at the 53rd International Film Festival of India in Goa today.

Dadasaheb Phalke Award for the year 2020 was accorded to Asha Parekh for her exemplary lifetime contribution to Indian Cinema.

She was conferred with this highest award in India in the field of cinema by the President of India Smt Droupadi Murmu at the 68th National Film Awards held on 30th September, 2022 in New Delhi.

During the session, Asha Parekh talked about her experience of working in various films such as Kati Patang, Teesri Manzil, Do badan, Main Tulsi Tere Aangan Ki, Baharon Ke Sapne  among others.

Apart from acting, the renowned actress also spoke about how she explored her career in TV direction and production. She said that Gujarati serial- Jyoti which turned out to be a success, gave her confidence. This motivated her further to come up with more TV serials. Best remembered for her series, Kora Kagaz, Parekh's other small screen offerings include Baaje Payal, Dal Mein Kaala and Kuch Pal Saath Tumhara.

Asha Parekh talked about her association with various organisations and associations related to film industry.

She became President of Cine Artistes’ Association from 1994 to 2000. She was also the first female chairperson of the Central Board of Film Certification (Censor Board) of India, holding the honorary post from 1998- 2001. She served as treasurer of Cine and Television Artists Association (CINTAA).

Asha Parekh is a renowned film actress, director and producer and an accomplished Indian classical dancer.

Starting her career as a child actor she made her debut as the lead heroine in Dil Deke Dekho and has gone on to act in over 95 movies.