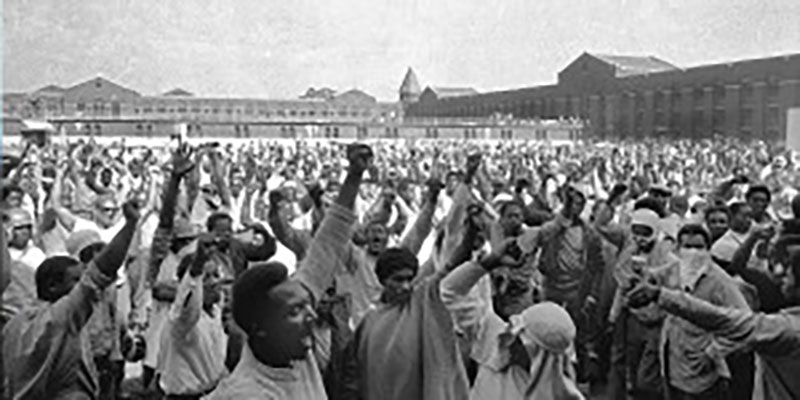 This documentary reviews the largest prison uprising of Sep 9, 1971, in U.S. history by Attica Correctional Facility inmates in New York by taking staff as hostages.

With the U.S. projecting the world’s highest incarceration rate, even after five decades of this uprising, Nelson tries to revive this incident by portraying what happened at Attica.

After negotiating with the inmates of Attica Correctional Facility, New York State Police brutally raided the facility in the bloodiest one-day clash on American soil since the US Civil War leaving 43 dead, followed by racist, barbarous vengeance against Black survivors.

With a distinguished career focusing on stories of the Black struggle against white supremacy, Nelson presents this story by conducting dozens of new interviews with prisoners, journalists, and other eyewitnesses with powerful usage of surveillance footage and extensive news coverage.  The audience can hear White House tapes of President Richard Nixon asking Governor Nelson Rockefeller, “Are these primarily Blacks that you’re dealing with?”

Clarence Jones, the publisher of the Amsterdam News, participated in negotiations with inmates, was interviewed at age 89, and said, “I will never forget Attica.”

Having long been invoked in pop culture, from Dog Day Afternoon to Orange, and is the New Black, as a symbol of rebellion, Nelson facilitates, through these references, the readers to understand the depth of history revealing Black prisoners' revolt against years of guard brutality, overcrowding, and stale contaminated food, due to racism, TIFF reports said.

Nelson passes these memories to a new generation with a motive to revive past historical events.

With a mission to transform the way people see the world through film, TIFF, a not-for-profit cultural organization is an international leader in film culture and generates an annual economic impact of $200 million CAD. TIFF projects include the annual Toronto International Film Festival in September; TIFF Bell Lightbox generously supported by contributors including Founding Sponsor Bell, the Province of Ontario, the Government of Canada, the City of Toronto, the Reitman family (Ivan Reitman, Agi Mandel, and Susan Michaels), The Daniels Corporation and RBC. TIFF Bell Lightbox features five cinemas, learning and entertainment facilities; and an innovative national distribution program Film Circuit.

New York-based Nelson is a MacArthur Fellow and recipient of the National Humanities Medal from President Obama in 2013. He co-founded the non-profit production company Firelight Media with his wife, Marcia Smith, in 1998. Attica (21) is his latest film. Nelson's extensive filmography includes the documentaries Marcus Garvey: Look for Me in the Whirlwind (02); The Murder of Emmett Till (03); Sweet Honey in the Rock: Raise Your Voice (05); the "Wounded Knee" episode of the PBS series We Shall Remain (09); Freedom Riders (10); Freedom Summer (13); The Black Panthers: Vanguard of the Revolution (15); and Miles Davis: The Birth of the Cool (19).