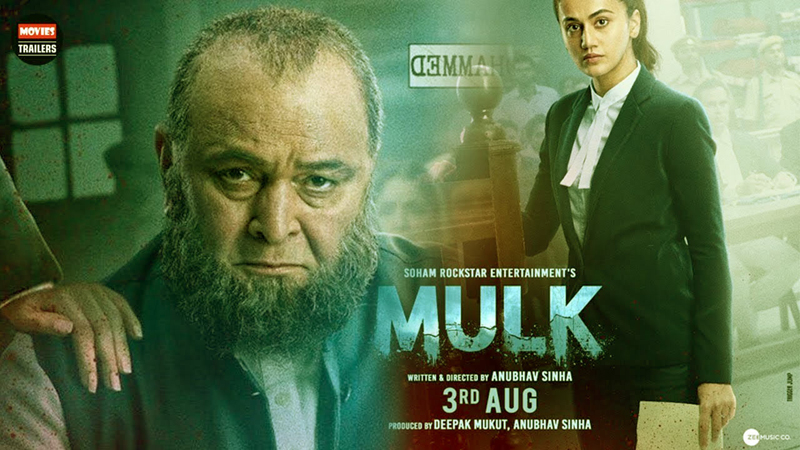 Mulk directed by Anubhav Sinha with a track record of 20 years in Bollywood, is the tribute being paid to the memory of the versatile and talented Rishi Kapoor who passed away of cancer last year. Sinha was chosen to deliver the Satyajit Ray Memorial Lecture at the 26th KIFF this year. The subject he spoke on was “Social Responsibility and Mainstream Indian Cinema”. So, it was a double whammy for Sinha. He admitted in his address that the main attraction for him to deliver the speech was that his name would appear alongside Satyajit Ray on the posters, announcements and notices.

This qualified engineer switched to making films in 1990 and though his earlier films were not very impressive or commercial hits, in recent years, he has hit the target of his audience and critics alike with three feature films that have drawn massive notice. These are – Mulk, Article 15 and Thappad, each exploring three very significant and socially relevant issues along with the values of entertainment through big stars, lavish mounting and wonderful performances.

His speech however, which drew a slim audience at Sisir Mancha, instead of addressing the subject holistically, got unfocussed because he decided to break up each phrase and explain them as separate words and not part of the entire topic.

But this in no way, is a comment on Mulk which deals with the victimization of a Muslim family in which the patriarch decided to stay back in India instead of moving over to the newly born Pakistan in 1947. The meaning of the Urdu word mulk according to the Rekhta dictionary for Urdu words, stands for “country, realm, dominion.” The prejudice among the audience, assuming that a majority belongs to the majority, begins from this title.

Anubhav Sinha admits that his decision to cast Hindu actors in each and every Muslim character in the film was a conscious one. He says if he had chosen a Muslim actor, the honesty would have stood to question. But is it also not a very intelligent commercial gimmick? However, this “gimmick” is very neatly undercut by the outstanding performances of the lead actors lead by Rishi Kapoor in a character he has never done before. His performance raises him as an actor to the next level of excellence, his portrait enhanced by the brilliant light play by the cinematography.

The four basic functions of a mainstream film – and Mulk is a mainstream film - to entertain, inform, educate and bring about social change. Mulk offers a “different” kind of mass entertainment. It has one of the biggest stars in Hindi mainstream like Rishi Kapoor. It offers Taapsi Pannu whose rise to fame via Pink has already established her powerful presence in a courtroom drama. It also has Manoj Pehwa, one of the most outstanding actors wasted in meaningless commercials and resurrects the multi-talented Neena Gupta in a lead role. It also waves a flag to the less utilised Prateek Babbar and  Rajat Kapoor who plays an entirely out-of-the-box Muslim police chief who is prejudiced against his own community. The slow mutations in his character enriched by his honesty and corrupted by his prejudice come across with moving credibility. Do not forget the wonderful portraiture by Ashutosh Rana as the public prosecutor who does not bother about demonstrating his bias against the minority community, does it with a lot of ridicule disguised as tongue-in-cheek fun with the entire courtroom joining in shaming the Muslims for many children, several marriages and low level of education. He does it with punch and sobers in the end when Aarti begins blasting the very man she is defending to prove his innocence! What more can one ask for, tell me?

If the acting is this good, why should we break our heads over “agenda” about the film being a kind of “whitewashing” of Muslims some twitteraties trolled Anubhav Sinha about?