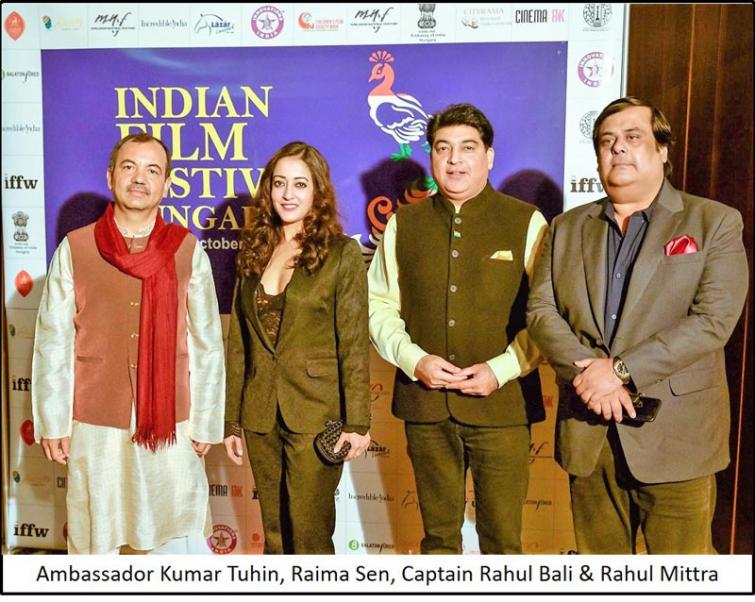 Budapest: The 5th edition of the Indian Film Festival Hungary opened to a full house in Budapest as ace Indian filmmaker Rahul Mittra and the beautiful Raima Sen walked the Red Carpet along with a number of celebrities and dignitaries from both India and Hungary.

Curated by Captain Rahul Sudesh Bali, the Indian Film Festival Hungary is an endeavour to promote the art and culture between India and Hungary via Indian cinema.

A total of 12 masterpiece Indian films in different Indian languages shall be screened at this 7-day cultural extravaganza that would see the participation of some of the biggest names from the Hungarian Film, Art & Cultural Fraternities.

As the cinema of India continues to spellbind the world with its magic, the audiences in Budapest will experience the grandeur of Indian films for the 5th consecutive year.

The festival is dedicated to Indian Cinema showcasing path-breaking films from India which have been deftly curated and proudly organised by Indian Film Festival Worldwide (IFFW) under the patronage of The Embassy of India in Hungary.

Ambassador Kumar Tuhin while appreciating the initiative said that the iconic brand of Indian cinema that aims at spreading love and happiness will be on display in Budapest from 7th – 13th October 2019 at the state of the art Cinema Pink.

A lot of interactive and entertaining events have been planned by IFFW and ASCC during the 7-day festival that is supported by Incredible India, Hungarian Film Fund, Balatonfured, Rajkot Palace & ICCR.

Film Maker Rahul Mittra described the Festival as a great platform for cultural exchanges and mutual appreciation of cinema between India & Hungary.

"The festival is a brilliant initiative to boost the bilateral relations between the two countries," feels Mittra.

Speaking on the occasion Captain Rahul Sudesh Bali emphasized that Cultural Cooperation always leads to Commercial Cooperation and Indian Film Festival Hungary has been a landmark festival promoting cultural cooperation and spreading the fragrance of India in Budapest via cinema.

This festival will foster a lot of collaborations and cultural confluences aimed to take the Indo-Hungarian friendship to the next level of bilateral cooperation.