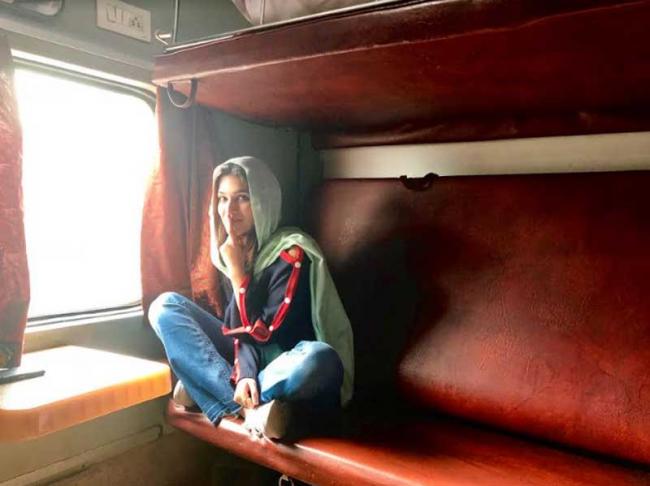 Mumbai, Aug 25 (IBNS): Actress Kriti Sanon boarded the Rajdhani Express, one of the quickest trains in India, after ages for her upcoming Hindi film Luka Chuppi.

Kriti informed her fans about her experience on social media.

Sharing a picture on Instagram, the actress said: "Rajdhani express after ageeeessss!!! ðŸ‘ðŸ»â˜ºï¸ took me back to childhood! On my way back to Gwalior! Some #LukaChuppi in the train ðŸ˜‰ðŸ˜œ"

Rajdhani express after ageeeessss!!! ðŸ‘ðŸ»â˜ºï¸ took me back to childhood! On my way back to Gwalior! Some #LukaChuppi in the train ðŸ˜‰ðŸ˜œ

In the picture, the Raabta star could be seen much in a de-glammed look. She had also used a piece of cloth to cover her head.

Kriti, who is now a prominent actress in the Hindi film industry, made her debut with Heropanti in 2014.

The actress had played the role of a young unconventional girl named Bitti Mishra in Bareilly Ki Barfi, opposite actor Ayushmann Khurrana.

On Aug 2, director Laxman Utekar started shooting for Luka Chuppi, which will be produced by Dinesh Vijan.

The onscreen chemistry of Kriti Sanon-Kartik Aaryan can only be seen in 2019 when the film will hit the theatre houses.

The release date is yet to be announced by the filmmakers.