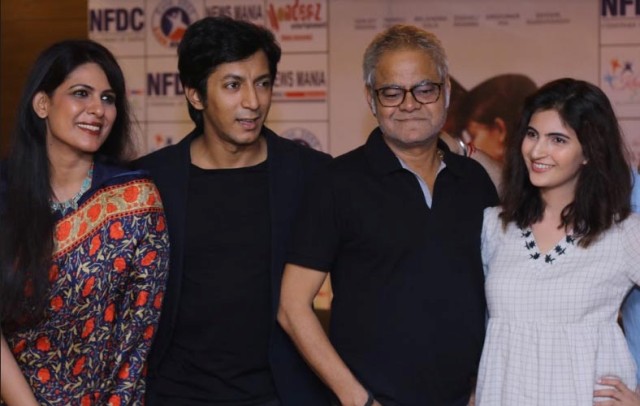 Kolkata, May 13 (IBNS): The cast of director Harish Vyas's "Angrezi Mein Kehte Hai", which is all set for a May 18 release, visited Kolkata to promote the film which attempts to probe the missing links of emotional expressions in middle class marriage.

"Angrezi Mein Kehte Hain" is a family drama and explores changing relationships between a middle-aged couple and how they fail to utter the three beautiful English words "I love you".

The film portrays the life of a middle-class family where Yashwant (Sanjay Misra) doesn’t appreciate the love that his wife Kiran (Ekavali Khanna) has for him and instead prefer the monotonous life of a working husband and a homemaker wife.

It then goes on to inculcate the realization that sometimes just loving someone is not enough and expressing that love is equally important.

Harish Vyas, the director who has also written the screenplay, said, “The reason why I used this title was no matter who we are or where we go we always say I Love You in English to express our love for someone.”

In a very subtle manner the film attempts to delve into individual feelings and depict that middle-class marriage is not just about carrying out responsibilities, he said.

Sanjay Mishra while speaking to IBNS said: "In my personal life I am a family man and I also sometimes tend to forget the efforts put in by my wife."

Actor Ayushman Jha said, "Yes, These small moments are the one we cherish and they shape our lives and relationships."

The film has been co-financed by the National Film Development Corporation.