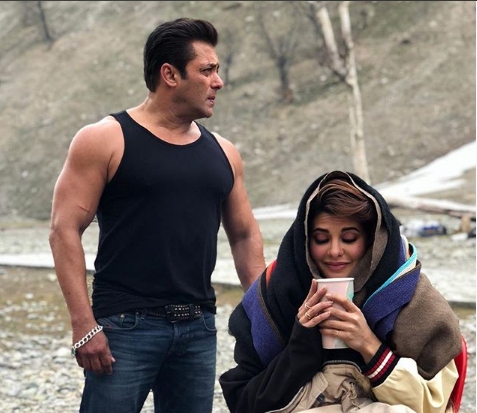 The cast and crew of the action movie are now heading to Leh and Ladakh for the next leg of shooting, media reports said.

He captioned the image as: "#biker boys #leh@beingsalmankhan #race3#trailerontheway #soon."

Actress Jacqueline Fernandez also shared an image with Salman from the set of the movie in Kashmir.

From the image it seems Jacqueline was finding it tough to adjust herself with the winter chill in Kashmir.

Salman, wearing a vest, looked absolutely dashing in the image.

Salman Khan will appear in a Race series movie for the first time in his career.

He is known for gifting his fans one major hit every year during Eid festival.

The other two movies of the Race series were hit.

The latest movie is directed by Remo D’Souza.

Salman and Jacqueline are uniting for a film for the first time since 2014.

They had last worked in Kick.