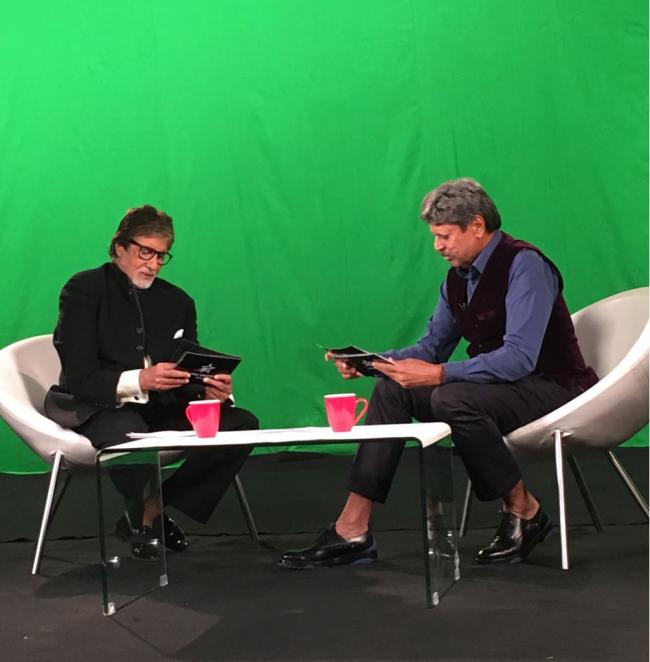 The duo shot for a special episode and onlookers just couldn't stop gushing about what transpired.

The teaser of the much awaited Badumbaaa song will be unveiled on Sunday at 2.30 pm on the Star Network.

But that's not it! This occasion was also the first time ex Indian cricket captain, Kapil Dev turned into the interviewer as he interviewed Bachchan about his Bollywood journey and his upcoming film, 102 Not Out.

The all-rounder is very excited about the new song which is being launched.

Both Bachchan and Kapil Dev have immense respect for each other and this was clearly visible when they met Sunday.

The conversation started with Amitabh talking about his journey in Bollywood and ended with Kapil Dev spilling the beans about his school and college days.

Those present on the sets revealed, "When Mr Bachchan was talking about his journey, Kapil Dev was quick to disclose that he used to bunk school in order to watch him on the silver screen.”

On hearing this, Bachchan was overwhelmed and both the legends had a hearty laugh.

The duo also spoke about Bachchan’s upcoming film 102 Not Out where the actor will be seen playing a 102 year old father to a 75 year old son essayed by Rishi Kapoor.

Kapil further revealed that he had seen the trailer of his film and was very excited for the movie.