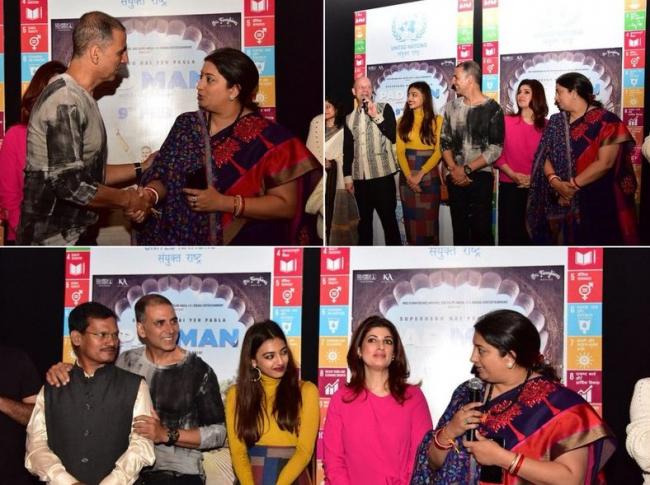 New Delhi, Feb 7 (IBNS): With two days to go for the release of R. Balki's Pad Man, Union minister Smriti Irani has participated in a panel discussion on menstrual hygiene with the star cast of the film.

Irani has tweeted few pictures where she was seen with the actors and producers of the film, which deals with menstrual hygiene.

Irani, who was also a popular face on television, was accompanied by actors Akshay Kumar, Radhika Apte and producer Twinkle Khanna.

Muruganantham was also present in the panel discussion on Tuesday.

Participated in a Panel Discussion on menstrual hygiene awareness with the star cast of @PadManTheFilm and original Padman Mr. Arunachalam Muruganantham after a special screening organised by @UNinIndia. pic.twitter.com/ecLp4oMz7f

Apart from Akshay and Radhika, Sonam Kapoor is also playing a lead role in the film.

Akshay and Twinkle are jointly producing the film.

The film is slated to release on February 9.