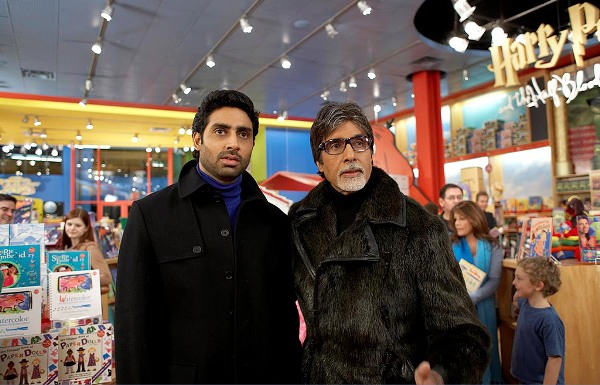 Mumbai, Feb 5 (IBNS): Father and Bollywood actor Amitabh Bachchan posted a touching message for his son Abhishek Bachchan as he turned 42 on Monday.

He also shared a collage where different pictures reflecting various moods and moments of the father-son duo as captured in the camera could be seen.

Big B also wrote a blog post to wish his son on the special day of the year.

" and it just turned the 5th of February here in Mumbai, India .. and it had turned the 5th 5.30 hrs ago where Abhishek the birthday boy is - Australia !! Wishes were exchanged and greetings and blessings were given .. the distance not withstanding .. distance has been reduced to the benefits of technology .. technology has been driven by an invention defeating the previous one in a matter of days and months .. it had not been such many moons ago .. it took a longer time for times to change .. now it shall take no longer .. obsolete and out of fashion happen a trifle more generously than before .. happily humans still take time .. physically of course .. temperamentally though it is beyond redemption," the senior Bachchan wrote on the post.

"It is beyond thought that the one that sat in wonder by the steps of the house on location, two front fingers in his mouth, hair independent of any set fashion hanging loosely over his broad forehead, a warm jacket keeping the cold of the hills at bay .. watching his Father shoot for his profession, silently ..  Abhishek .. the enunciation process and prayer to the God’s .. even now has that same wonder and questioning nature .. is a lot more quieter than his younger sitting on Father’s lap days .. and taller .. but still the nature similarity !," he said.

Blessing his son, Big B said: "May the blessings of a Father be his most desired .. for fulfilment and prosperity .. in a world that brings forth a challenge a minute."

Th co-owner of ISL side  Chennaiyin FC will soon be seen in  Anurag Kashyap's Manmarziyan.