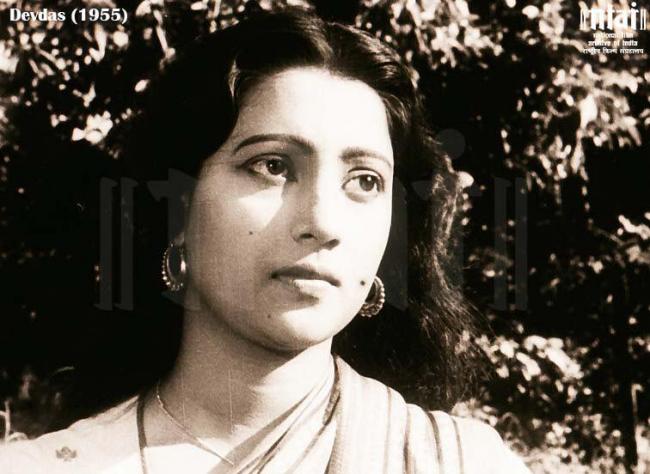 The picture shows her playing the role of Parvati or Paro in the 1955 Hindi movie Devdas.

According to film chronicles, she made her film debut in 1952 in the movie Shesh Kothay but it was never released.

The following year she was cast against Uttam Kumar in the movie Share Chuattor. A romantic comedy, the film launched them as the most preferred leading pair of Bengali cinema for more than two decades.

She also was also cast with another famous Bengali actor Soumitra Chatterjee. Some of her famous films with Chatterjee include Saat Paake Bandha, Datta, and Pranay Pasha.

Sen enthralled cinema-goers with her poignant acting in in Deep Jwele Jaai (1959), where she played the role of a hospital nurse. On the other hand, as the lead character of Bankim Chandra Chatterjee's famous novel Devi Chaudhurani, she essayed her enigmatic power with poise and grace.

Although she acted in a few Hindi films, her role as Parvati in Devdas (1955) where Dilip Kumar was in the eponymous role and as Aarti devi in Aandhi (1975) against Sanjeev Kumar were highly acclaimed.

Sen however removed herself from public glare after completing nearly 25 years in the film industry and led a reclusive life, surrounded by her immediate family, until her death.