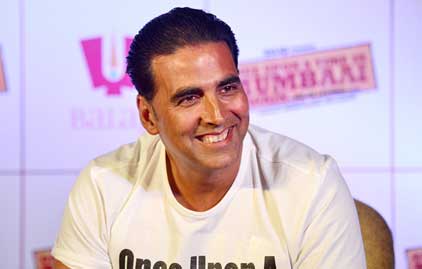 Even on 47, the actor manages to woo his fans every time he appears on screen with his well toned physic, martial arts magic and most importantly his versatile acting.

Born as Rajiv Hari Om Bhatia in the year 1967 in Amritsar, he has appeared in over 125 films.

Black belt champion in Taekwondo, the actor has done several action films and is a trained martial artist.

Before entering into the film industry, Kumar has worked as a chef and a waiter in a restaurant in Bangkok.

Kumar made his Bollywood debut in 1991 with the film ‘Saugandh’, which was followed by the 1992 thriller film ‘Khiladi’.

After the success of ‘Khiladi’ he appeared in several other films of the Khiladi series including ‘Main Khiladi Tu Anari’, ‘Sabse Bada Khiladi’, ‘Khiladiyon Ka Khiladi’, ‘Mr. and Mrs. Khiladi’, ‘International Khiladi’,and ‘Khiladi 420’.

The year 1999 proved to be one of the most successful year in Kumar’s career as his performance in two films ‘Sangharsh’ and ‘Jaanwar’ was praised by the critics .

Apart from gaining fame as an action hero, Kumar’s comic roles has always been praised and with films like ‘Hera Pheri’, ‘Mujhse Shaadi Karogi’, ‘Garam Masala’, 'Bhagam Bhag', 'Housefull' and 'Housefull 2', he established himself as a successful comedy star of the industry.

He also starred in few romantic films like ‘Dil To Pagal Hai’, ‘Namastey London’, ‘Jaan-E-Mann’ and others.

In 2008, he made his debut as a television host in the popular reality show ‘Fear Factor – Khatron Ke Khiladi’.

He has proven his acting skills in films like 'OMG' and 'Special 26'.

Besides, Kumar has been awarded the Padma Shri by the Government of India and has been honoured with the Rajiv Gandhi Award for his outstanding achievements in Bollywood.

The actor is married to his co-star and actress Twinkle Khanna and the couple is proud parent of a son and is soon expecting their second child.

He also owns the team Khalsa Warriors in the World Kabaddi League.