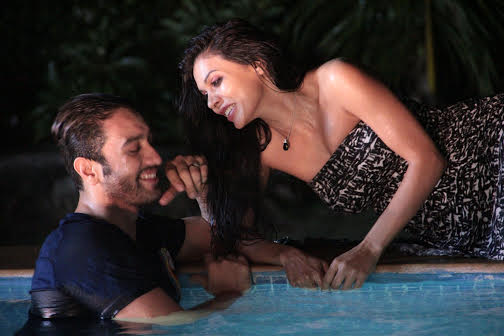 Adhyayan Suman and Sara Loren's Ishq clicks by the pool side

Shooting a late night romantic scene, both were very comfortable in each other`s company.

It was a busy day for the crew though, who shot for a long period.

According to the sources, Sara Loren who plays a supermodel in the movie had to be by her man.

The scene was to be shot near the pool and the sets had to be redesigned to create the right vibes for the scene, and a lot of lights were replaced for the mood to settle in.

During the shoot, both hit off well and were seen cracking jokes and laughing.

Their friendship has hit off at the right time.

Director Anil Ballani believed that the bonding is a good sign, as the movie sees them romantically involved.

He said, "Their comfort on and off the camera will benefit the development of the movie in the long run."

In the meanwhile, it was a very hard day for the cast and the crew alike, as a lot of changes had to be made on the sets.

Both, Adhyayan and Sara shot for long hours as the weather was very favourable.

Also, they started the shoot very early in the morning and the shoot concluded late in the night.

They had a few breaks in between, but everyone was so carried away with the pleasurable climate that they ended up working more.

Producer Ajay Jaiswal was also present on the sets.