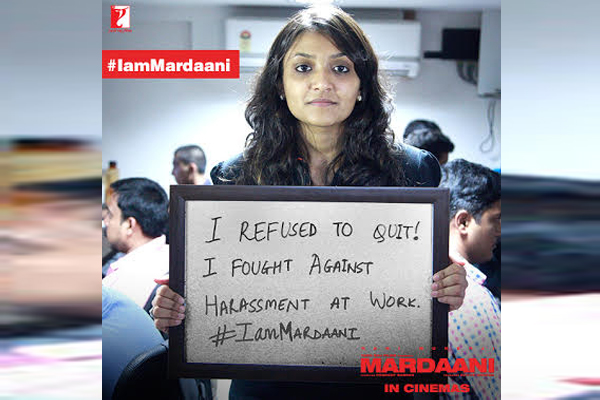 A movement that encourages women to say 'I am Mardaani'

India Blooms News Service | | 08 Sep 2014, 12:56 pm
#â€˜I am Mardaani
Mumbai, Sept 8 (IBNS) Rani Mukerji's recently released film 'Mardaani' is creating a stir all across the country. The title Mardaani not only depicts strength, but also an attitude and the spirit of the movie.

The makers say the women across the nation are resonating with this theme, and to promote the same, the makers of the movie have taken the initiative to launch a movement- ‘I am Mardaani’.

#IamMardaani is a movement about women who have shown strength and determination at the toughest hour and have emerged stronger than ever before. It is an attempt at reaching out, recognizing and felicitating women who stood for themselves or rescued the weak and inspired a movement.

As a part of this campaign, bloggers from a country wide scale were asked to participatein the MARDAANI Blogger stories contest, and sharestories of real life Mardaanis they knew.

The contest received over 65+ entries which were then validated and 10 shortlisted winners got a chance to meet Rani Mukerji.‘I am Mardaani’ has gained huge momentum on Social media platforms with women from various geographies sharing their ‘Mardaani’ stories ranging from stories about women who stood up against dowry harassment to those who volunteer at NGO for the betterment of the underprivileged kids.Holding placards with messages, women are sending their pictures and telling their fearless tales.

With this campaign, Mardaani has started a movement that instils confidence among women to stand strong in the face of adversity. It has connected those who need inspiration and motivation to those who have become inspiration.

To know more about this ‘Mardaani’ movement visit - http://bit.ly/Mardaani-JoinTheMovement

Directed by Pradeep Sarkar and produced by Aditya Chopra, the film released worldwide on Aug 22.