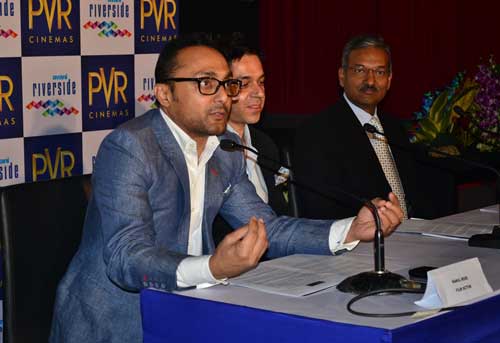 Actor Rahul Bose is donning the hat of a director for 'Poorna' , following which he started a campaign asking social media users to share memories or experiences from when they were 13 years old.

Amongst the politico's and serious matters we had a happy something spreading smiles allover. The campaign fast caught momentum and became talk of the town.

Rahul Bose took twitter down their memory lane and twitter was buzzing with some bitter sweet memories of childhood.

Rahul Bose says, "When I recorded and tweeted the #WhenIWas13 video blog I did so because it was such fun remembering the time one entered teenage, the anxieties, the fun, the grown up feeling etc. But what has been amazing is the response of people who have watched it. Everyone replied with photos and tweets reminiscing about their 13 year old selves. It's obviously struck a chord. It shows how deep down we are perhaps not all that different from each other."

It was welcomed with open arms. Not only has twitter enjoyed themselves reliving their memories, its also the tinsel town which had been besotted with the campaign and merrily enjoyed engaging .

Here are the Bollywood Celebrities who tweeted :

Harsha Bhogle @bhogleharsha - "Ah, #WhenIWas13, when the dustbin was our roller, when a bat was shared among 12, when joy was small and fulfilling"

Homi Adajania‏ @homiadajania - "Bwahaha unlike u @RahulBose1 I was still growing #WhenIWas13 Waitin for @PoornaTheFilm Here's when we were someteen" while sharing a picture of Rahul and himself.

Tara Sharma Saluja ‏@tarasharmasaluj - "@RahulBose1 I was quite the 'muggu' studied a lot and I loved riding horses. I looked hilarious haaha #WhenIWas13"

Vikram Chandra @vikramchandra - "@RahulBose1 when I was 13 I had just falteringly taken part in my first debate and had told myself I would never ever do so again!"

Rajdeep Sardesai ‏@sardesairajdeep - "#WhenIWas13 I was quizzing in school and playing cricket in the breaks! And yes, I read newspapers!"

Atul Kasbekar ‏@atulkasbekar - "#WhenIWas13 I wanted to be @BjornBorg and Sunil Gavaskar rolled into one. My wish came true - I played tennis ball cricket.

Salim Merchant ‏@salim_merchant - "#WhenIWas13 I wanted to start my school band. We found a bass player & gtr player but no drummer.Finally got an ex-student who played drums"

Mandira Bedi @mandybedi : “Ahhhh the days #WhenIWas13 ... I had braces and a long frizzy plait!!

The movie Poorna, directed by Rahul Bose, is the story of a 13-year-old girl from Telangana who created history on May 25, 2014, by becoming the youngest girl in the world to conquer the Mount Everest.