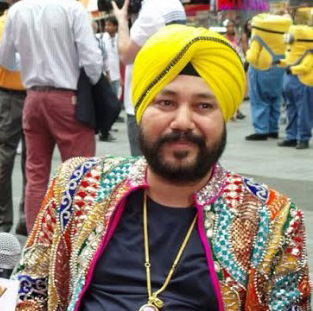 Known for his humanitarian activism, Daler Mehndi became the first Indian celebrity to have taken this challenge. The Musical Maestro completes his challenge with three whole buckets of ice water and challenged three of Bollywood’s biggest stars Amitabh Bachchan, Shahrukh Khan and Priyanka Chopra to do the same.

The ALS Association in the USA is aimed at eradicating this fatal neurological disease from the world, and in the meanwhile is helping patients and their families to deal with the trauma of living with ALS.

In order to raise funds to run its noble cause, the internet is alive with support. The ALS Ice Bucket challenge comes from obscure origins, but involves responding within 24 hours after being nominated for it by either dumping a bucket of ice water upon oneself or forfeiting by making a financial donation to the ALS Association. Among popular names who have forfeited the challenge is US President Barack Obama.

“Hey little angel, I accept your challenge. I’m doing it for you, for this good cause,” said Daler Mehndi in the video before proceeding to dump three whole buckets of ice water on him.

Other global celebrities who have completed the challenge include young musician Justin Bieber, Facebook mastermind and owner Mark Zuckerberg and Microsoft owner Bill Gates. US President Barack Obama has been challenged too, but he forfeited by making a donation of $100 to the ALS Association.

Daler Mehndi has become the first Indian celebrity to complete this challenge, and has brought the challenge to India by roping in the Bollywood biggies. The humanitarian Daler Mehndi has once again proved his dedication to the cause of making this world a better place.