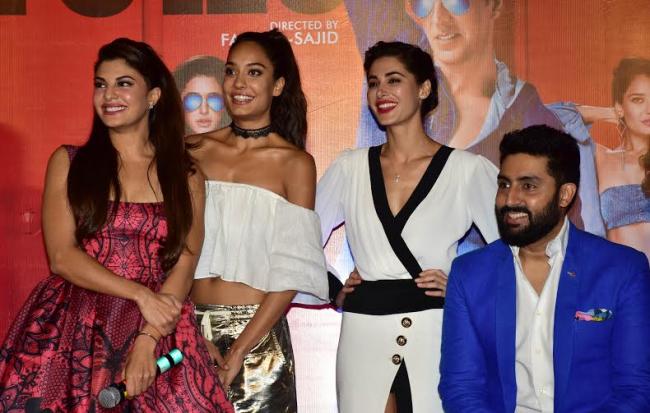 The event had the entire star cast in presence; Akshay Kumar, Riteish Deshmukh, Abhishek Bachchan, Jacqueline Fernandez, Nargis Fakhri, Lisa Haydon, Boman Irani, Chunky Pandey and Jackie Shroff.  Even the producer Sajid Nadiadwala and director duo, Farhad - Sajid and Nandu Ahuja, Head, India Theatrical Eros International were present for the launch event. The entire cast along with the producer and directors met up at producer Sajid Nadiadwala's house in Juhu and arrived together at the multiplex in a mini bus which was being driven by Akshay kumar. Akshay, Riteish and Boman hosted the evening with a fun, rib tickling skit introducing all the characters in the film, which left everyone in splits of laughter. It also reminded everyone of the hilarious acts they put up during award shows    Then the trailer of the film was shown to everyone which received a fabulous response from all those present. Simultaneously the trailer was shown to all the fans of the franchise in over 100 cities of India. Post that, Sajid Nadiadwala and Akshay Kumar decided to give everyone a surprise and also revealed the first song of the film, which was an added bonus. The entire team had a fun time answering all the questions being fired to them in a quirky way and sharing their experiences of working on the film. It was totally a Housefull of an event! With this instalment, everything has been raised to the power of three. Three heroes, three heroines,3rd June release.