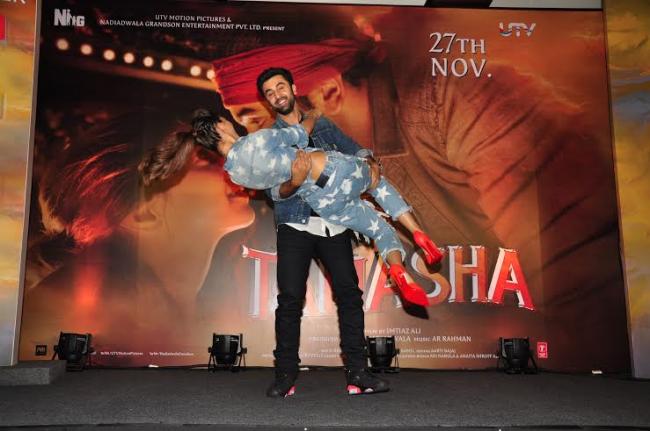 5 reasons which make Tamasha a must watch

The crackling chemistry that former lovers Ranbir and Deepika share, continues to be written and talked about. Going by their scenes in the promos on air, the movie looks like a treat for all fans of this jodi.

Besides the sizzling chemistry that Ranbir-Deepika share, the two are also powerful actors. With a filmmaker like Imtiaz Ali, who is well known for contemporary love stories, at the helm, it's exciting to have this kind of talent collaborate for a film. While we've seen Imtiaz work with Ranbir for Rockstar and Deepika for Love Aaj Kal; the two superstars have also paired up in Yeh Jawaani Hai Deewani. With the trio coming together for the first time, the movie has become a talking point with cinemagoers.

The soundtrack of Tamasha is a big treat for all music lovers. Listeners have loved Matargashti, Heer Toh Badi Sad Hai, Agar Tum Saath Ho and Wat Wat Wat. The album, which has a mix of happy ,sad, soulful and desi rock numbers, has been topping music buff 's playlists.

Travel has played an integral role in Imtiaz's films. With Tamasha too, the director takes us to beautiful locations in multiple countries -from the untapped beauty of the exotic island Corsica to Tokyo, Delhi, Shimla and Kolkata. The entire team had immense fun shooting for the film.

Filmmaker Sajid Nadiadwala has taken every effort to mount the project, made under his banner Nadiadwala Grandson Entertainment Pvt Ltd, on a lavish scale, which has generated a lot of buzz around it. The production of Tamasha has been phenomenal at every stage -right from the making of the film to the promotions and release.