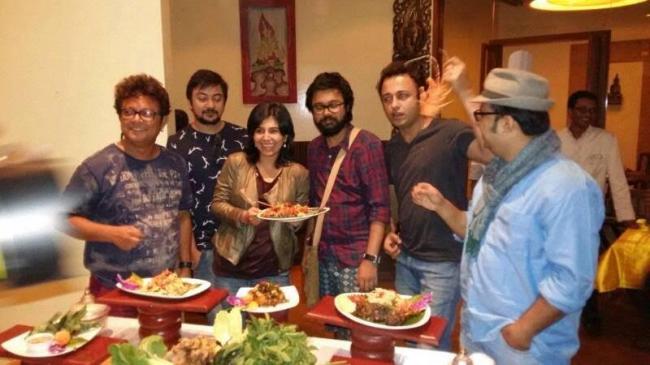 "There will be a new composition from my band Cactus heralding the Christmas in the Yuletide season, it will be a singles to be uploaded digitally on net like our previous launch earlier in 2015," the affable music man tells IBNS on the sidelines of the special screening of Haabaab at Thai restaurant Benjarong.      "Celebrating art is synonymous with celebrating life. As art manifests in different forms - through music, through films. Through food," Sidhu, sporting a new frizzy hair-do, points out adding that his short film also celebrates different layers of human relationships, including same sex ones.      Further on cuisine, Sidhu, a self-confessed foodie, says he finds the lemon-flavored chicken preparation at the outlet the most yum.      "In fact Kolkata has a throbbing restaurant, pub culture which I like. I find the atmosphere amazing at Someplace Else. Not a bad idea if there can be a live band here as well (in the Thai restaurant)," Sidhu says rating it as one of his favorite hangout zones.      Having fond memories of Kolkata Christmas since his childhood, Sidhu lists savoring Christmas cake, sipping wine, joining adda and ghure berano (frequenting places) as the must-dos during this season leading to the new year.