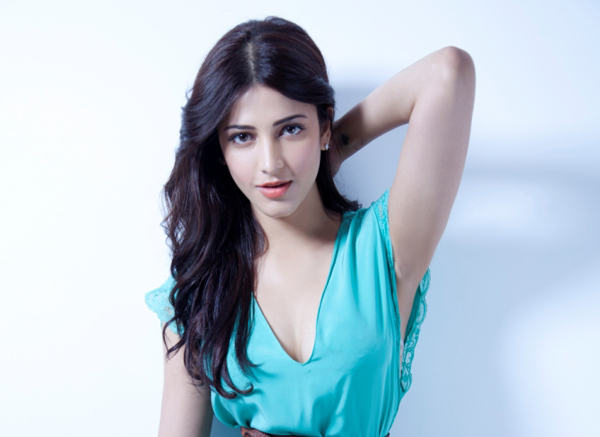 India Blooms News Service | | 24 Nov 2015, 03:36 pm
#Shruti Haasan rules industry
Mumbai, Nov 24 (IBNS) It can be clearly stated without any doubt that 2015 has been a power packed year for actress Shruti Haasan.

An actress, who's a noteworthy name across all the three industries she works in : Tamil, Telugu and Hindi, Shruti has managed to knock it out of the park for herself with her back to back successes and crossing the 100 cr mark for her film across each language - a first for any Indian actress! Her Hindi films this year : Gabbar opposite Akshay Kumar and Welcome Back opposite John Abraham (which grossed over 100 cr at the box office) have both been major commercial money spinners that were declared blockbusters at the box office. Her Telugu film Srimanthadu opposite Mahesh Babu has been a monstrous hit and has just completed 100 days, 150 cr and counting proving its continuing strength.  Her recent Diwali release in Tamil - Vedalam opposite Ajith made history for being the biggest opener in Tamil cinema ever! Not just that, it has also just crossed the 100 crore collection mark. Needless to say its roaring at the box office in India and internationally.  Her success unanimously proves her true star power across all three languages and making her the only actress with solid and unparalleled national appeal.  She has worked alongside some of the most respected, successful and loved stars and directors solidifying her own true blue star status of a talented performer.  Her success and her pan India appeal has made her quite the brand favorite as well.  After being the face of brands like Lloyd (air conditioners), Philips (light appliances), Haute Curry (Indian apparel) Emami Naratna Cool Talc, she has now been signed on as the national face of the cola brand Fanta.