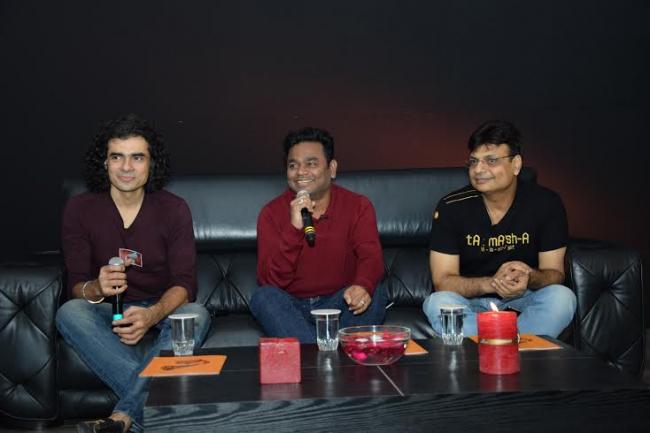 Transiting from the regular music launches, 'Tamasha' music baithak was a beautiful celebration of Irshad's lyrics melting into Rahman's melody to create the magic of a song. Refreshingly, the baithak also had Ranbir Kapoor welcome its participating guests over a surprise skype chat. ‘Tamasha’ features nine tracks, each one distinctly different from the other. Rahman, Kamil & Imtiaz have delivered extraordinary music in ‘Rockstar’ & ‘Highway’, songs that lived much beyond the film’s run. In ‘Tamasha’, this team has used colloquial words in traditional poetic forms to tell hummable stories with each song. Lyricist Irshad Kamil stated that never before has he had such freedom to write lyrics that present human emotions in such different flavours.   But the icing on the cake is Rahman’s whimsical yet outstanding compositions. This album surprises with a Mika song for Rahman (Heer toh badi sad hai), makes you hum with a local vocal number (Wat wat wat) & elevates your mood with the operatic, grand Sukhwinder song (Chali Kahani) and "the soul of the film" in Rahman's own voice (Tu koi aur hai).  So far, ‘Matargashti’ by Mohit Chauhan, the first song released, has become quite popular.  With eight more unique renditions coming up, this musical ‘Tamasha’ trip will soon be the flavor of the year.

The film is presented by UTV Motion Pictures and Nadiadwala Grandson Entertainment. The music album releases on Oct 16.
Related Images