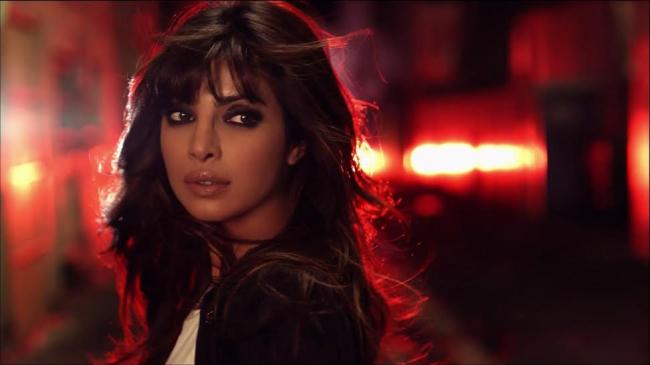 Trans World Features (TWF) | | 25 Aug 2015, 04:02 pm
#Priyanka Chopra, # Quantico, # Bollywood
Priyanka Chopra these days is busy in Hollywood shooting for her debut international television show, Quantico, where she plays Alex Parrish. The actress, who is upbeat about both her international and Bollywood projects, spoke to TWF correspondent Gaurav Sharma

Hi, you seem to be spending more time in the west than in India these days.

(Laughs) Yes, it’s becoming hectic but I am enjoying this schedule. I am in a very happy space with all the right things happening to me right now. I am busy shooting for Quantico and it has been an amazing experience so far.

The first promo of Quantico also shows you in a hot sex scene, which has grabbed a lot of eyeballs.

I know this was coming but I won’t be saying anything on that right now. (Smiles) What I would like to say is that this show is very gripping and there are a lot of surprises in store. This sex scene is part of one of those surprises and you should watch the show to know more about it.

This show is also high on action. How has been the experience shooting for those high-adrenaline action scenes?

What about an action film in Hollywood?
That will be really great but I need to be given an offer for that. If I like the script and the role, why not? Who doesn’t want to be part of good films, be it Bollywood or Hollywood? I am an actor and am open to any role in any medium that I feel will give me a chance to perform.

You have been in the Hindi film industry for 13 years now. How has the experience been?

I must admit that it has been the best time for me. I have been working for 13 years and in all these years I have seen both ups and down but I am happy to have got so much from the industry…the chance to work in some great films, great actors and know some very good people. I am sure I will be in the industry for a long time and there will be many more such lovely moments that I will experience.

You are an established name in Bollywood and at the same time you are into singing and doing international television. How are you balancing things?

I feel, if there’s a will there’s a way. It’s not a very difficult thing. If you want to do something, you need to be passionate about it and you will see you will automatically find time to pursue it. It’s not at all a difficult task because I don’t feel tired doing so many things. It’s just how you manage your routine. You just need to be organised and disciplined.

You will be seen next in Sanjay Leela Bhansali’s Bajirao Mastani?

That’s going to be a great film. (Smiles) I am sure a lot of people are already waiting for the film’s release. We have already done quite a bit of the shooting and as actors everyone, Ranveer (Singh), Deepika (Padukone) and I am eagerly waiting for the film to release. It is a grand project…you know the kind of films Sanjay Leela Bhansali makes and the amount of effort he gives to detailing and filming his projects. So, I am keeping my fingers crossed.

That too is a very ambitious project of Mr Jha. It is a hard-hitting film and if you have watched his earlier films you must be knowing the kind of film this one will be. I play a no-nonsense feisty cop but the film’s not just about police and the system. There are a lot of emotions that to come into play as the story moves forward. So, there’s a lot coming from me in the next few months and I hope the audience will like me in all these projects (smiles).