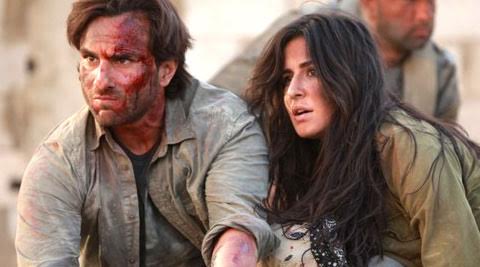 The plot revolves around global terrorism and demanded Pakistan as a backdrop for certain scenes.

The Bajrangi Bhaijaan director was keen on shooting those scenes across border, but the unit felt that it wouldn't be safe to do so.

Cinematographer Aseem Mishra said, “We created Pakistan in Malerkotla in Punjab. Kabir, the production designer and I narrowed down Malerkotla because of its mosque, local people, narrow lanes and overall architecture, which creates the verisimilitude of a town from Pakistan. We dressed it up with posters and flags etc. I have given this section a little greenish warm feel to it. We got some really beautiful evening light in some of the scenes. When you see the film, it all looks so real.“

Interestingly,  Kathryn Bigelow too had recreated Pakistan in Chandigarh and other locations in Punjab when she shot her film, Zero Dark Thirty (2013).

The Saif and Katrina starrer-'Phantom' is produced by Sajid Nadiadwala and  Sidharth Roy Kapur.

The film is all set to release on Aug 28.