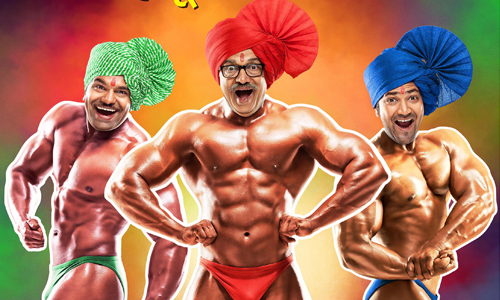 Poshter Boyz does a Google Hangout

One of the most successful online tools, Google Hangouts have been increasingly used by Bollywood and now even Indian politicians to reach out to and directly interact with their target audiences.

The focus of the ‘Poshter Boyz’ Google Hangout was questions surrounding the movies recently launched theatrical trailer which has been setting quite a blazing trajectory on social media along with Shreyas’ decision and experience on turning a hands on producer.

The Poshter Boyz theatrical trailer crossed the milestone 1 lakh views on the official Affluence Movies Youtube channel in below three days touching 1.5 lakh views at the end of day four.

In the interactive hangout session, Actor-Producer Shreyas Talpade, apart from answering a string of questions on the movies theatrical trailer and his decision to turn producer also spoke at length about the music of the movie.

With composer-singer Lesle Lewis helming the music of the movie, another first for Marathi cinema, the expectations obviously are high and Lesle has not disappointed. Elaborating he said that a key highlight of the movies soundtrack is the opening track which features a fusion of a romantic melody, Lavani and a Bhajan all in the same track, designed to introduce the three principal characters of the movie Dilip Prabhavalkar, Aniket Vishwasrao & Hrishikesh Joshi. Another key highlight is a promotional track which features himself.

Talking about the film Shreyas revealed that ‘Poshter Boyz’ is an incident of three ordinary people who, to their surprise, find their pictures on a poster promoting vasectomy and how that error changes their lives around.

Being produced under Shreyas Talpade’s own banner Affluence Movies Private Limited and co-produced by Hadi Ali Abrar, the film is directed by Sameer Patil and has been shot across real locations across Western Maharashtra.

Other credits include producer and costumes by Deepti Talpade, story and dialogues by Sameer Patil, screenplay by Sameer Patil and Charudatt Bhagwat, and cinematographer by Pushpank Gawde.

‘Poshter Boyz’ is set to hit the silver screen on Aug 1.