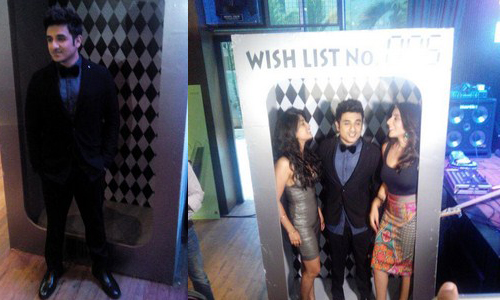 India Blooms News Service | | 19 Jun 2014, 10:15 pm
#Bollywood singing debut
Mumbai, June 19 (IBNS): There was a deafening applause at Hard Rock Cafe Wednesday night as Vir Das took stage and sang 'Pyaar Hai Ek Kutti Cheez.' The actor performed with his band Alien Chutney at the musical gig of 'Amit Sahni Ki List'. The event was organized to launch the music of his upcoming film and Vir was at his wittiest best as he interacted with the crowd during the event.

Post the music launch, Vir was asked by one of the media persons about his perfect girl. Laughing aloud he said, “Intellegent, career minded. Actually forget all that! She should just laugh at my jokes.” This has already raised the expectations of the audience about the film. Director Ajay Bhuyan was asked if the film is based on his life, and he replied that he did have a list but making a rom-com didn’t feature in that.

‘Amit Sahni Ki List’, is about Amit, a 28-year old successful investment banker with an MNC, and his search for the woman from his dreams, correction, and the woman from his list. In his pursuit, he meets many women but in vain, until he meets Mala. Mala is everything that Amit is not looking for in a woman. And yet for the first time, Amit’s list philosophy comes under serious scanner as he starts falling for her. They get engaged, but forty-eight hours after their engagement, the woman from Amit’s dreams – correction - the woman from Amit’s list - Devika - walks into his life! What will Amit do next in this story of lists vs. Love?