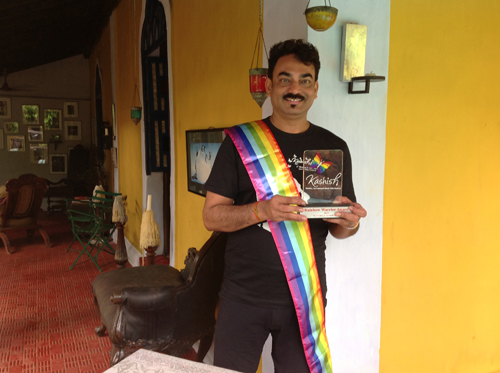 The award was presented by Bollywood actor and former Miss India Celina Jaitley on May 25 at the closing of KASHISH. The other recipient of the award was gay rights activist and founder of Humsafar Trust Ashok Row Kavi.

``This year 2014 has truly begun as a year for the LGBT community in India. Despite the Supreme Courts verdict on Section 377, the transsexual community got sexual status recognition, a bearded drag queen won the Eurovision contest in the face of much opposition from regressive Russia, an openly gay man joined the NBA in the USA and here at home an openly gay man received the Padma Shri. And now you give me this award. I am honoured. Thank you everyone at Kashish. More power to us all. More peace, freedom and equality in India and the world around us. Soldier on. Stay happy. And gay!,'' says Wendell Rodricks.

Wendell Rodricks coming out in public was as glamorous as it could be - socialite and author Shobaa De wrote about his civil partnership with his partner French national of around two decades at the time,  in the front page of a national newspaper.

Rodricks gave up his career in hotel management to set the ramps ablaze in India and abroad. Following stints in Los Angeles and Paris, Wendell returned to India in 1988. Within a few years he was designing for big name brands, before setting up his own label in 1990. Three years later he moved to his ancestral village in Goa, where he is based out even today.

He also established the much talked about Wendell Rodricks Design Space in Panjim. On the personal front, he was the first out gay fashion designer. and the first openly gay couple in India.

Now, he is the first openly gay person to be awarded the Padma Shri – the fourth highest civilian honour to be awarded by the Indian government. He was honoured for his contribution to Art in Fashion Design.

"Right now in India, with more and more LGBT youth wanting to come out and live openly with dignity, we need icons who have stood up to challenges and set examples with their own lives, as 'out' gay, lesbian, bisexual and transgender persons.,'' said Sridhar Rangayan, festival director.

``We also need to build a sense of history and understand on whose shoulders we stand. KASHISH, as a festival that celebrates LGBT art and culture openly in a mainstream space, salutes these amazing personalities with its newly instituted Rainbow Warrior Award. In its debut year, the award has been conferred on two outstanding gay men Ashok Row Kavi and Wendell Rodricks, who have tirelessly championed for gay rights,'' added Rangayan.

The fifth edition of the festival was held between May 21 and May 25 at Mumbai's iconic theatre Liberty Cinema and Alliance De Francaise and screened 154 films from 31 countries.