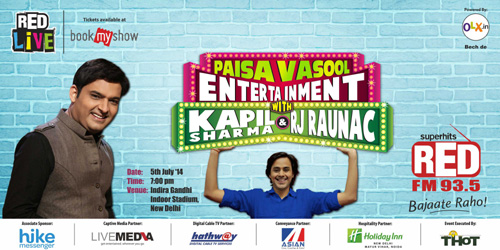 Kapil Sharma, hailed as one of the wittiest Indian stand-up comedians, popular for his programmes such as Comedy Circus Ke Superstar, Comedy Circus Ka Naya Daur and Kahani Comedy Ki has been roped in for the first time by RED FM. The comedian, who was ranked 96 in the top 100 celebrities of 2013 by Forbes India magazine, is currently hosting Comedy Nights with Kapil on a mainstream entertainment channel.

The event is scheduled to be held at the Indira Gandhi Stadium on Saturday, July 5, 2014 expecting thousands of enthusiastic fans. The most sought-after artist is all set to entertain the guests with his  sense of humour and liveliness along with other supporting artists.

RED FM’s RJ, Raunac, well known for playing pranks with the listeners will join Kapil for some fun and also give an open challenge to the fans, details of which will be announced in the coming week.

On the very first Red Live comedy gig by Kapil, Nisha Narayanan, COO, RED FM, said, “RED LiVE has been a phenomenal success and has received fabulous response from the people across metros and Tier-2 and 3 cities. The vertical has seen the biggest and the most popular artists performing LiVE for our listeners. The two successful seasons of RED LiVE saw concerts in markets like Delhi, Kolkata, Varanasi, Jamshedpur, Nashik, Kanpur, Bhopal etc. and the overwhelming response we received, has strengthened our confidence in the vertical.

"We decided to rope in Kapil Sharma because he is the biggest comedian in the country and being a Punjabi himself gives him an instant connect with the audiences in Delhi and North. We are very excited about expanding the scope of RED LIVE from just Music to Comedy as well. With the strong IP that brand RED has built, and with the kind of response we have been receiving to our events, we are now all set for the biggest RED LIVE gig so far. It is very encouraging to see our confidence in RED LiVE getting reflected amongst our listeners, advertisers and partners as well.”

The tickets for the event are available on Bookmyshow.com and at the following locations: