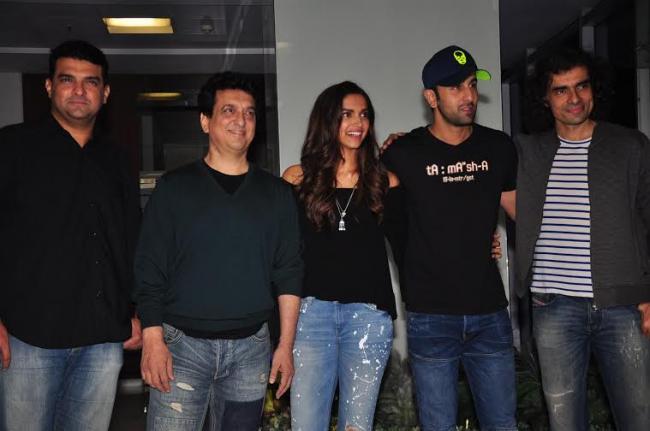 Tamasha team indulges in in shot wrap up party

The party had in attendance the lead pair Ranbir, Deepika, director Imtiaz Ali and co-producer Sidharth Roy Kapur in addition to the host Sajid Nadiadwala and his wife Wardha..
The entire team seemed to be in a great mood as they were caught joking, smiling and posing for the shutterbugs.

Deepika turned heads in a trendy black off-shoulder Zara dress and ripped jeans whereas Ranbir wore a quirky 'Tamasha' T-shirt. The party went on till long and was hosted by the film's director Imtiaz.

A large part of Tamasha, which releases next year, is believed to have been shot in the French island destination of Corsica, while a part of the film has been shot in Mumbai.

Tamasha, is Deepika and Ranbir's second film together after the 2013 hit Yeh Jawani Hai Deewani.
It is also Deepika's second project with Imtiaz Ali after 2009's Love Aaj Kal. Meanwhile, Ranbir and Imtiaz, who are known to be close, last collaborated on Rockstar (2011).
Related Images