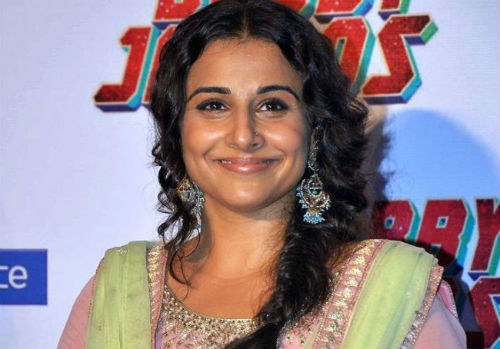 Trans World Features (TWF) | | 15 Jun 2014, 04:56 pm
#Vidya Balan
Vidya Balan wants to be the number one detective. No surprises, it's her role in her upcoming film Bobby Jasoos. TWF correspondent Sreya Basu in conversation with the actress in Mumbai

You are one actress who has the capability of taking the responsibility of an entire film on her shoulders. Does that make you stand out among your contemporaries?

Why is that you do only one film a year?

I can’t multi-task. With the kind of films I do, they are invariably one or two schedule films and are intensive and require my full attention. I am the kind of actor who believes in investing every molecule of my body in every film I do.  I start living the life of the character I play and lose reality orientations. So I can’t handle hopping from one set to another.

And now that Bobby Jasoos has happened, how was the experience of playing a detective for the first time in your career?

It was one of the most precious experiences for me as an actor. The moment I signed up the film, I knew this was going to be very, very different.

What kind of homework did you do to play Bobby Jasoos?

We did a little bit of research, spoke to some of the detectives, met some of them and figured out the kind of questions they ask, how their brains work, and that’s how we arrived at Bobby.

So, can we call Bobby Jasoos a spy thriller?

I think it’s more of a “dramady” … there is drama, comedy … it’s about the story of a girl from a small city and her world. So I don’t know if you can categorize it as just a spy thriller.

We see you in several get-ups in the promo of the film. Which was the most fun one for you?

I had the most fun doing the male disguises. Because so many of my male co-stars will crib when they are asked to wear beard or moustaches. Even if they grow a little stubble, they would complain. But honestly, it is not that uncomfortable as they make it look. I have worn beards and moustaches and  from experience I can say that I could carry the looks very easily. There is one where I disguise myself as an astrologer with half-bald patch on my head, dirty teeth … I also dubbed with the dirty teeth. And the best part is, my voice and body language used to change automatically the moment I wore a wig, beard and a moustache.

Can you relate to Bobby in real life?

Well, it is my nature to spy on people. It’s only now that they have a film on this, otherwise I am always into spying around with friends and people I know, but all for fun.

Do you spy on your husband Siddharth Roy Kapur as well?

Is there any good news on the way (hinting at her pregnancy news)?

The only good news I can give you is about July 4 (release date of Bobby Jasoos). Apart from that, I have no other good news to share.