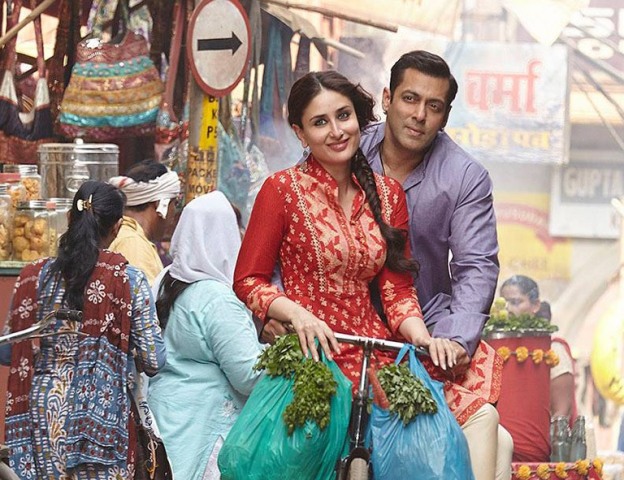 Marriage has not affected my career: Kareena

Trans World Features (TWF) | | 26 Jun 2015, 10:06 am
#Kareena Kapoor, # Bajrangi Bhaijan, # Salman Khan #SalmanKareena #BajrangiBhaijan
Kareena Kapoor Khan hasn't had a release in quite some time now. The actress, who was last seen in Singham Returns, apart from a few cameos in between, will be seen next in Bhajrangi Bhaijaan opposite Salman Khan. The actress, who completes 16 years in the industry this year, spoke to TWF correspondent Gaurav Sharma on films, career, life after marriage and more.

You have completed 16 years in Bollywood. It must have been a great journey?

Oh it has been an enriching one. (Smiles) I come from a family of actors and directors and I knew quite a bit about the industry before I ventured into acting but there were so many things that needed to be learnt. So, it has been one of the most fulfilling experiences of my life as I got to know so many people, work with them and learn so many things. I also came across some of the loveliest human beings during this time and got to work in some very good films. I can only be grateful to all these people.

Sixteen years is a long time in Bollywood for actresses. What’s your success mantra?

There isn’t any formula. It’s indeed a long time according to Bollywood standards but things are changing. There was a time when actresses weren’t offered lead roles after they got married. This thing has changed because there are people who are working with new ideas and concepts and are experimenting with new subjects. I have always felt that an actor can survive as long as he or she enjoys the work. I have always enjoyed my work and still do that. That’s probably the reason I am still getting good offers and they are coming from some really good filmmakers who believe in good cinema.

Not at all (smiles again). At least I don’t think so except that I am happier person now and am enjoying life. And more importantly, it hasn’t affected my career a lot, which many still believe happens with marriage

How do you go about choosing scripts?

I think I am lucky that good scripts are coming my way. I take a lot of time to read a script and then decide on doing or not doing the film. I try and do films, which I can relate to and the ones that make me happy. In the last one year I took a lot of time to observe things and read scripts in detail. It helps me a lot. I thing 15-16 years is a long time and I think I don’t have to prove myself everyday. At the same time I just can’t do every film that comes my way. I am trying to do films, which I really feel I can do justice to by being a part of it.

Is that the reason you weren’t seen on the big screen for almost a year.

(Smiles). No, it just happened that I was going through some scripts and now I am doing quite a few projects. Bajrangi Bhaijaan is a big release and I am also doing R Balki’s film alongside Arjun Kapoor. You can’t plan these things. There are times when there’s not a single release in a year and then there are three back-to-back releases.

You will once again be seen opposite Salman Khan in Bajrangi Bhaijaan after Bodyguard.

I have always enjoyed working with Salman. He is a great co-star and a human being. I think that’s what everyone says about him. Bodyguard was one of the biggest films of my career and I am sure Bajrangi Bhaijaan too will be equally big. I am really excited about the film. Kabir Khan is known to make good and meaningful films and I am sure this one too will be liked by everyone.

Arjun Kapoor, who’s opposite you in Balki’s next is junior to you where as Salman is quite senior to you. How different is it working with seniors and relatively juniors?

There isn’t much difference except for that with seniority comes experience and maturity. At the end of the day what matters is the chemistry between the actors. I have never looked at things that way. I made my debut opposite Abhishek Bachchan, who too was making his debut and followed by Yaadein with Hritik (Roshan) and then did Ajnabee with Akshay Kumar and Ashoka with Shah Rukh Khan, who were already quite senior to me at that time. So, it all about working with a good actor and I am happy that I have got a chance to work with some of the best actors.

Another of your upcoming films Udta Punjab is said to be a hard-hitting film given that it is being directed by Abhishek Chaubey?