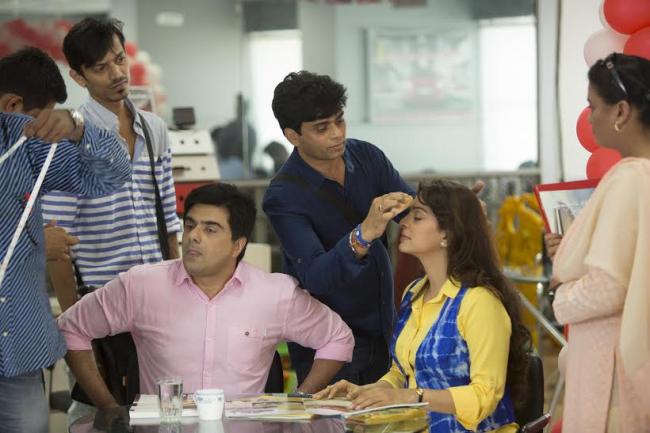 Producer does make up for Juhi Chawla for 'Chalk N Duster'

India Blooms News Service | | 21 Jun 2015, 02:05 pm
#Juhi Chawla, # Chal N Duster, # Shabana Azmi, # Zarina Wahab, # Divya Dutta, # Upasna Singh, # Sameer Soni
Mumbai, June 21 (IBNS): Makeup man turned producer Subhash Singh has been doing actress Juhi Chawla's makeup for over 18 years now. He approached her for his maiden venture titled 'Chalk N Duster' for which she agreed on doing. Now, even after so many years, the veteran is still doing her make-up for his movie.
According to the sources, Juhi Chawla has a great rapport with Subhash. After being with her for so many years, the Dadasaheb Phalke award winning actress wanted him to do it as she has faith in him.
Their friendship goes back in the days when Juhi was taking Bollywood by storm. Despite that, she would always be sweet and polite to all her crew members, and that's when they instantly struck a chord. Ever since, the duo have been inseparable and formed a working partnership.

Before the shoot for Chalk N Duster commenced, she cheekily asked him if he would be doing her makeup in the film, Subhash gave her a nod and said, "Ye bhi koi poochne ki baat hain?"

The movie also stars actresses Shabana Azmi, Zarina Wahab, Divya Dutta, Upasna Singh in major roles along with Girish Karnad, Jackie Shroff, Sameer Soni and Arya Babbar in pivotal roles.
The movie is about teachers, the education system and the commercialization of the system in the country, and focuses on the plight of teachers.

Chalk n Duster is directed by Jayant Gilatar and written by Ranjeev Verma. The lyrics are penned by Javed Akhtar and the music is being composed by Sandesh Shandilya. The movie is produced by Subhash Singh and  Amin Surani under the Surani Creations banner.
Related Images