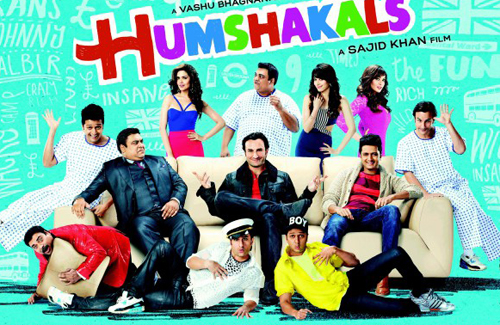 India Blooms News Service | | 02 Jun 2014, 01:47 pm
#Humshakals
Mumbai, Jun 2 (IBNS): The makers of upcoming Bollywood comedy caper 'Humshakals' have released a jukebox of the songs for the fans to enjoy on YouTube.

According to the makers, the response received for the launched songs has been very positive, rising every day on the popularity charts.

The jukebox comprises of s funky numbers that compliment the essence of the movie.

It opens with ‘Caller Tune’, the song which director Sajid Khan claims have the easiest steps in the world.

The vocals to this foot tapping number have been rendered by the well-known singers Neeraj Shridhar and Neeti Mohan.

‘Look into my Eyes’ sung by Ash King and Neeti Mohanhas has taken over the party circuit with it's fresh look and lively composition.

Sanam Puri and Shalmali Kholgade have lent their voices to ‘Barbaad Raat’, the track with distinctive foot thumping drum beats and trumpet tunes.

‘Hum Pagal Nahin Hai’ is a one of its kind number with superb guitar tunes and Acapella voices, with Himesh at the vocals.

The jukebox closes with the voices of Mika Singh, Palak Muchhal from ‘Khol De Dil Ki Khidki’, a fast paced song that will be a definite surprise in the film.

The multitalented musician Himesh Reshammiya had composed all the songs.

The lyrics to these brilliant tracks have been penned by Sameer Anjaan, Mayur Puri and Shabbir Ahmed respectively.

Directed by Sajid Khan, produced by Vashu Bhagnani’s Pooja Entertainment, and presented by Fox Star Studios, Humshakals is slated to release on Jun 20.