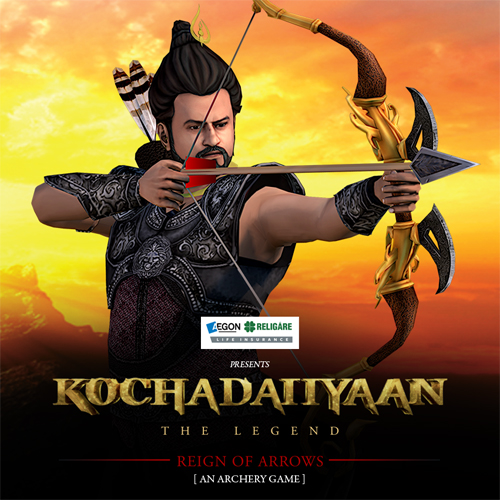 ARLI noted that the game has been ranked - no. 1 game in Indonesia, no. 2 arcade game in Austria, no. 4 in the gaming category in UAE & South Africa and amongst the top 25 arcade games in the US.

The game has been developed by Hungama Digital Media Entertainment Pvt. Ltd., and can be downloaded from any device on the Android, iOS or Windows platform or through Facebook, without any charge.

It went live on Mar 19, 2014 and was listed as one of the top five new apps in the Google Play Store, the makers asserted.

Yateesh Srivastava, Chief Operating Officer, Aegon Religare Life Insurance said, “We are happy to sponsor Kochadaiiyaan’s Reign of Arrows and be associated with this game as it subtly allows us to connect with the younger generation and promote the AEGON Religare brand.”

Srivastava said, “Besides the branding opportunity, the game is structured in a way as to generate leads for AEGON Religare. This is our first experiment with full blown gamification and we are looking forward to the outcome with a lot of interest and anticipation.”

According to the ARLI, the Aegon Religare iTerm Insurance Plan has been integrated with the game to specifically showcase Aegon Religare’s product proposition aimed at building immunity and inner strength of the player, quite similar to providing security to one’s family by opting for a term plan.

In the game, the player is required to single-handedly fight the invading army.

It is an action-packed archery game that provides an immersive gaming experience with the brand cues, lead generation tools and an option to download Aegon Religare’s iTerm app, built into the game play.